This is a bit different post, but it’s always focused on tech, that is equal to “living” nowadays. In this post I want to describe, in order to give some suggestions or inspiration, the stuff and tips I use when I’m traveling abroad and I need all my tech and connected stuff to make a photographic reportage and remaining safe/private also outside my “everyday environment”.

Background: as maybe you know, I’ve done some photographic reportages in Iraq and Syria about the Yazidi genocide and religion and on the war against ISIS, in Croatia and Sicily about the migrants, etc… where there’re some -not mainstream- events to report. So, at the end of August 2022 I went in Kosovo to make a reportage about the ethnics and politics tensions at the borders between Kosovo and Serbia. The argument is very complicated, briefly, Serbia still doesn’t recognize Kosovo as an indipendent nation but Kosovo want that its documents are recognized by Serbia, and some people who live in north Kosovo think they are Serbian an not Kosovari. But this was a very complicated situation, to better understand you can read two articles, and view my photos at my photography website:

For the first time/trip I traveled without a notebook. And this has been great, because a notebook takes lot of space (and weight) inside the backpack and I don’t travel with the checked-in luggage but only with the hand luggage.

But as a photographer I needed lots of tech support, specifically something to backup the daily photos from the memory cards to an external drive. So this time (and for the first time) I brought with me only iPads: one 2018 13” iPad Pro and one 2022 iPad Mini.

And this choice has been very handful but in the beginning I was a bit scared of it, due to the limitations of iPadOS. But after the initial fear I was super happy with only the iPads! And this will be my future travel setup.

Let me explain my requirements:

Everyday I need to copy all the photos (taken during the day) from the cameras CF and SD memory cards to a(t least one) external NVME drive, in order to have (and leave) a safe backup hidden inside the hotel. Because a memory card can break, or the police can seize it, or ask you to delete all the photos stored inside (as it happened to me after I went inside Mosul during the liberation of the city from ISIS).

This simply step was impossible to do with old iPadOS because there wasn’t a way to browse the external drives. Now that File app can do this, the procedure is very easy.

But I also needed to move the photos straight to the external drive. Because the free space on my iPad is low. And the iPad has only one USB port, so I couldn’t copy the files locally to the iPad, then remove the card reader and after move the files to the external drive. But I needed to do the procedure with at least two devices attached to the iPad.

So I bought a USB-C hub with the power pass-through, I was a bit skeptical if the iPad was capable to power both the card reader and an external drive. But with my surprise it is capable of this also without the power supply. Anyway the power pass-through is useful to keep the battery alive (it drains very fast with two devices connected).

And both the iPad Pro and iPad Mini are capable to power the card reader and external drive while transferring lots of GBs of data, without issue. 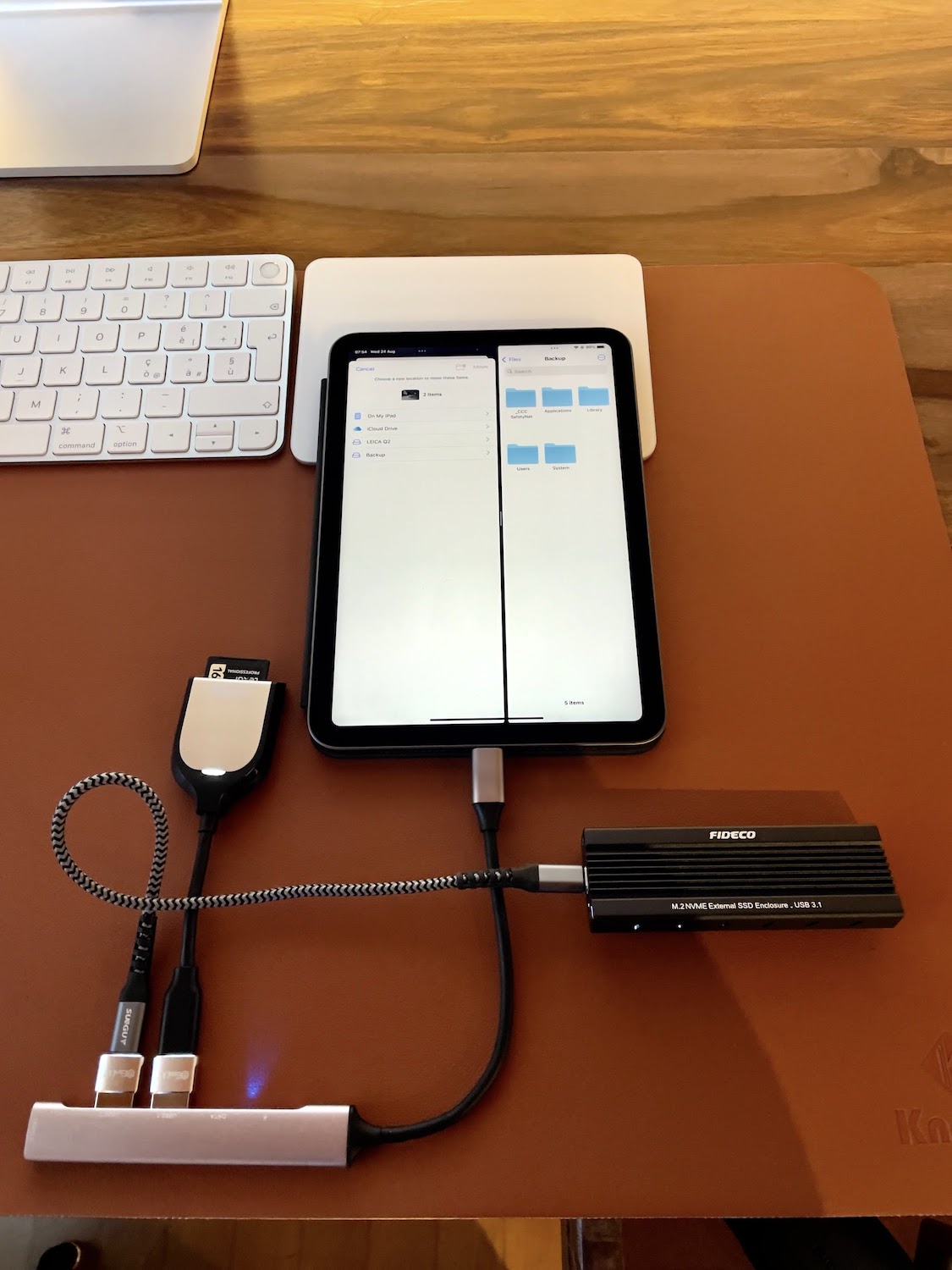 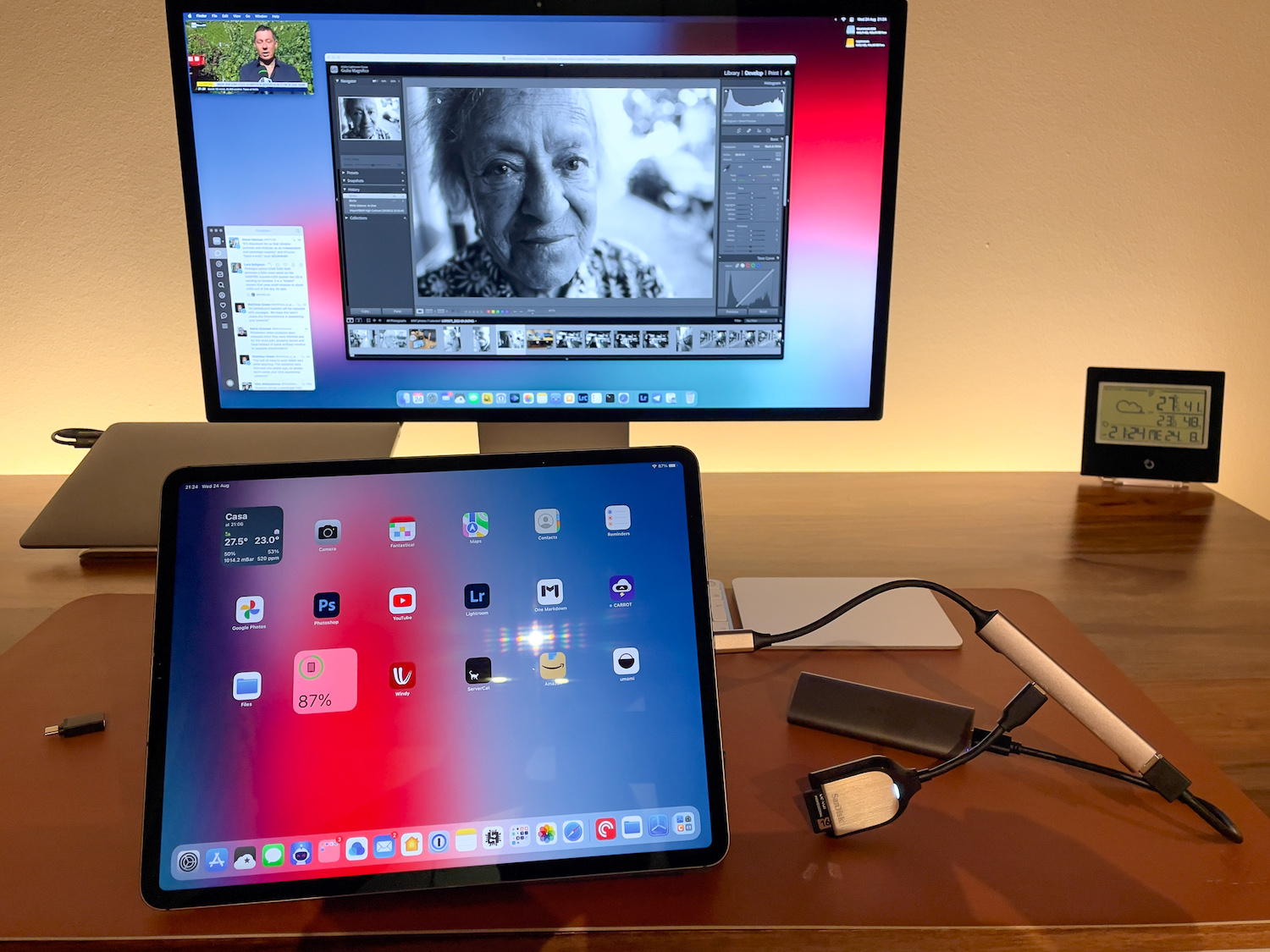 The hub I used is this inexpensive one (15€ from Amazon): Amazon link

Thus every evening in the hotel I copied all the daily photos to the backup drive. It was bit long procedure because it was taking also 30/40 minutes to copy all the photos (about 200 RAW per day). But is just the time of a shower and this setup was (surprisingly) stable.

And this was my “fixed setup” inside the hotel: I used to leave the iPad Pro in the hotel with all the peripherals connected and the iPad Mini inside my messanger bag with me (also because the 12,9” iPad Pro doesn’t fit in the bag and it’s also very heavy).

To me the iPad Mini is the best way to quickly check some news while drinking a coffee, or read an article while standing. Because I can use it with one hand only and it’s light. I think it’s a lovely device! 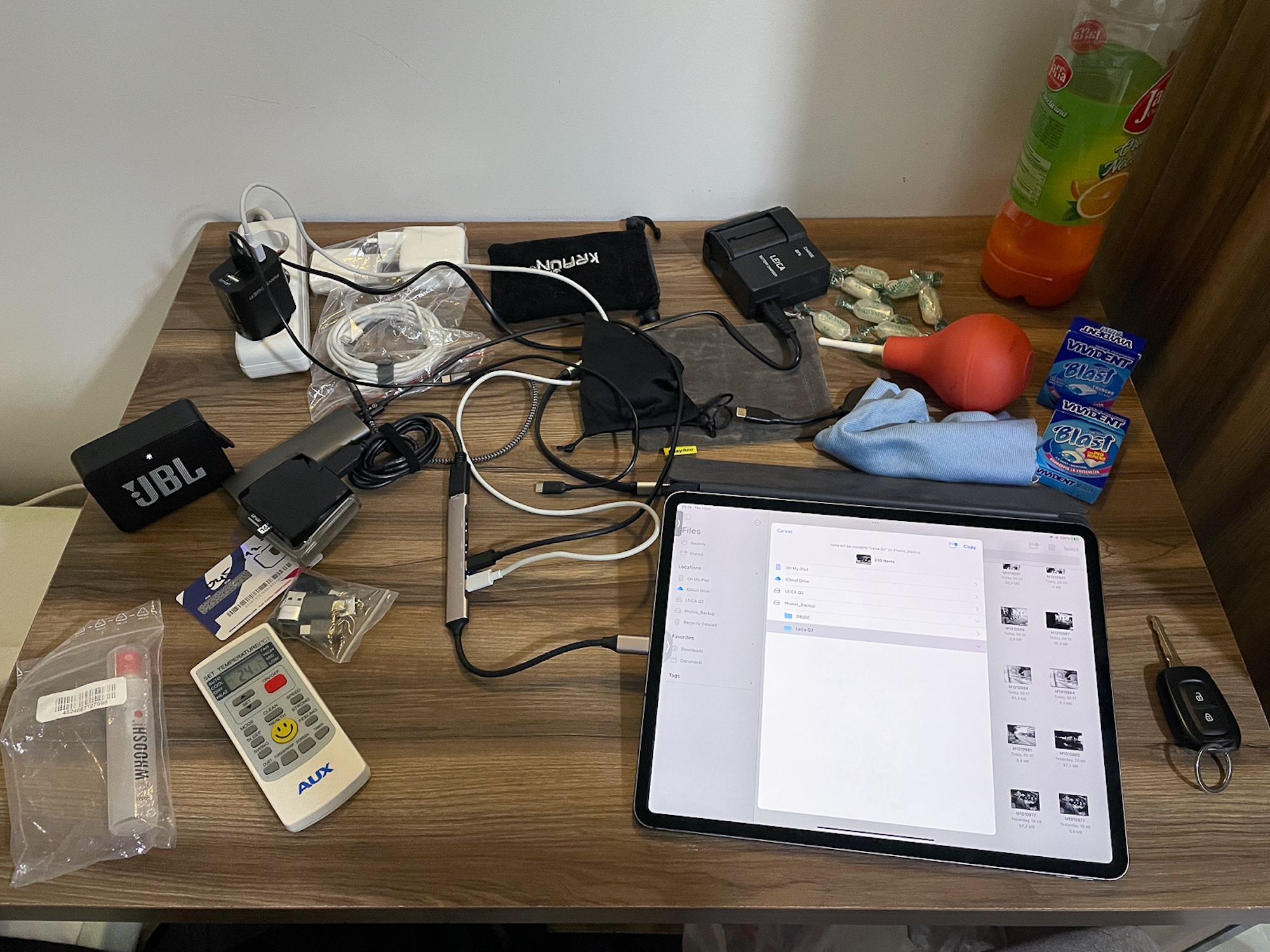 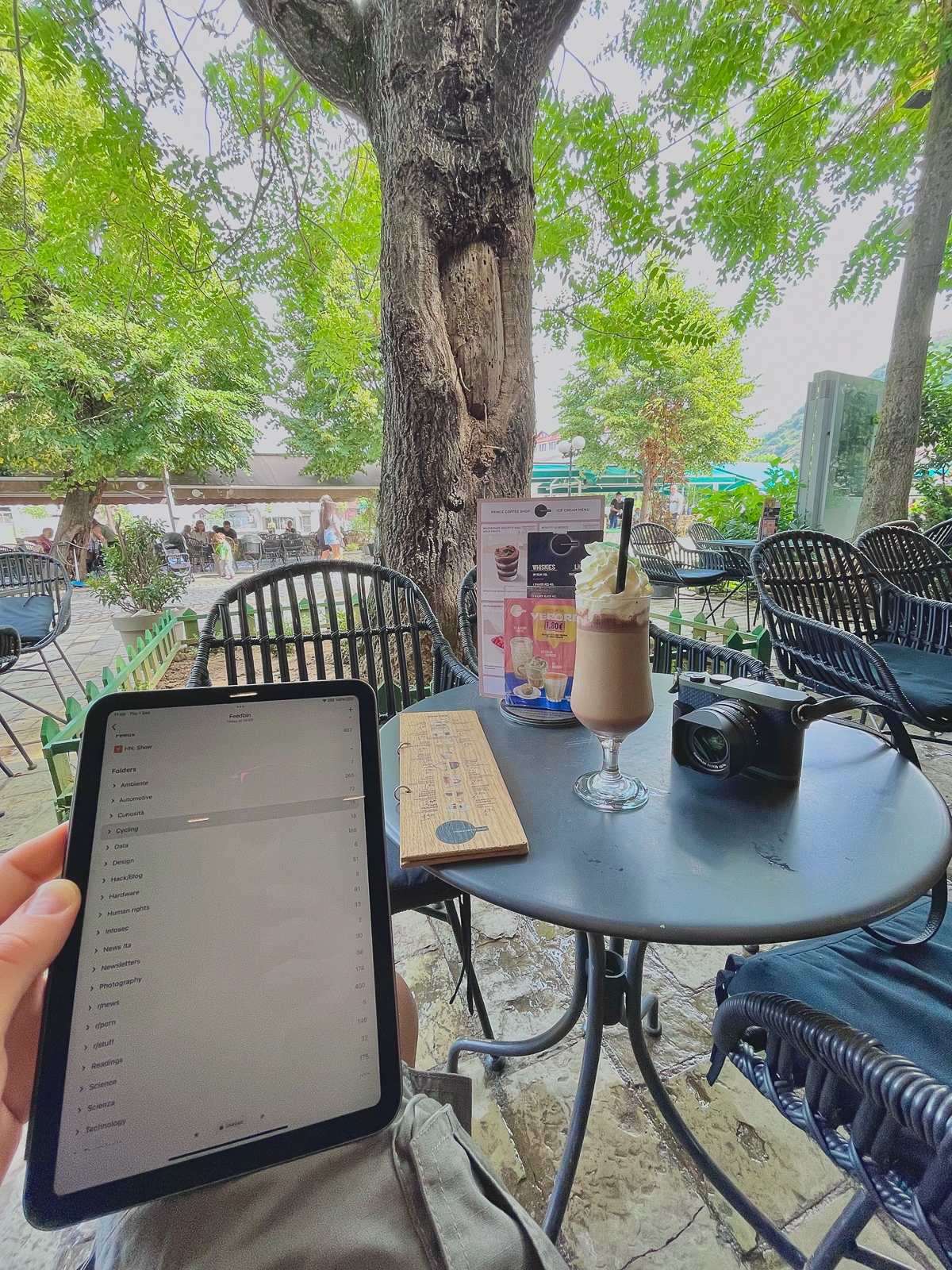 With this setup I went able to travel one week with only a backpack and a messanger bag (for the cameras and iPad Mini) including all my clothes and tech stuff, see the photo: 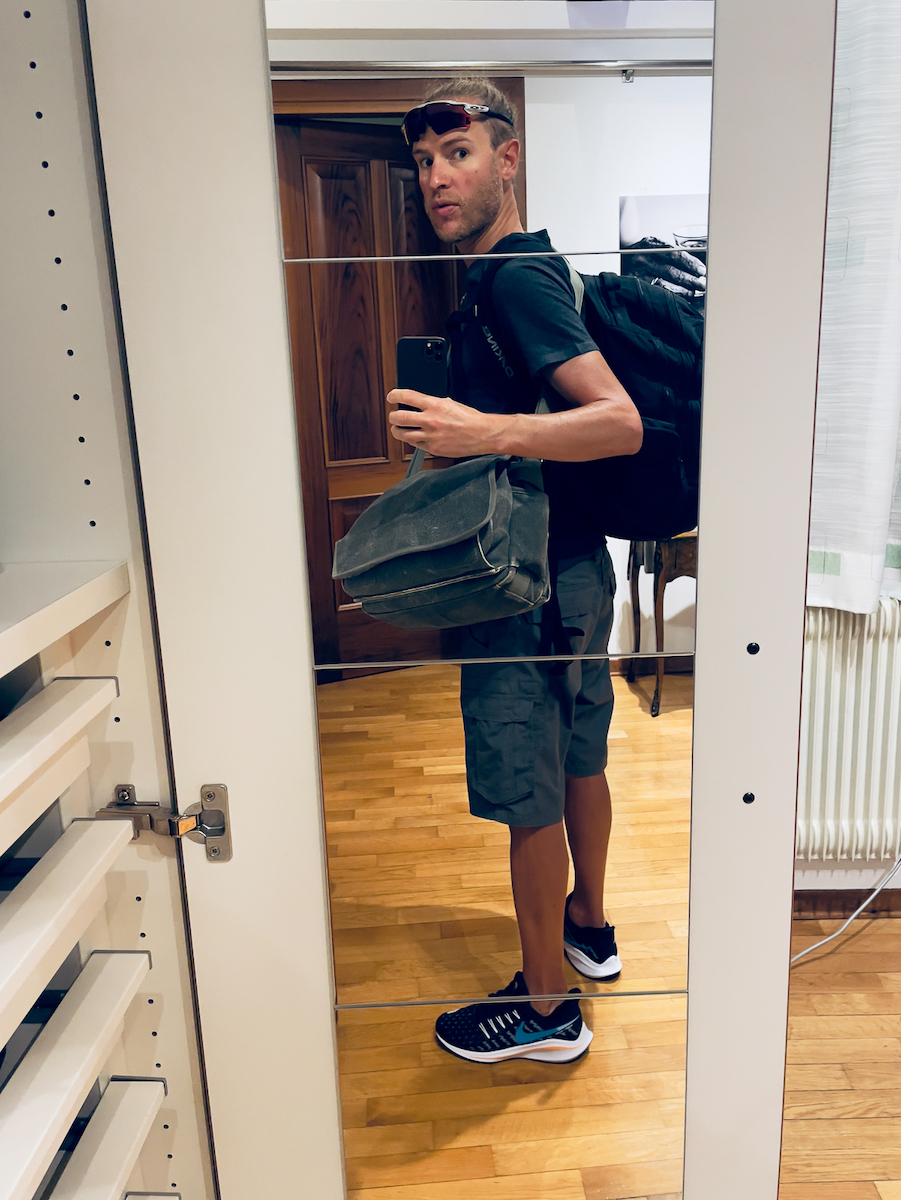 Then there’s the connectivity issue. Because Kosovo is not in Europe and there’s no free roaming inside it (remember to disable the roaming in your phone).

So as soon as I landed I bought a Kosovo SIM from ‘Vala’ ISP with 30GB of data for 10€/month and free calls/messages. Not a bad plan at all.

My suggestion here is to have a very little bag with the tool to eject the SIM, with your main SIM, and leave it inside a pocket of your wallet (because you can always need a quick swap of it). 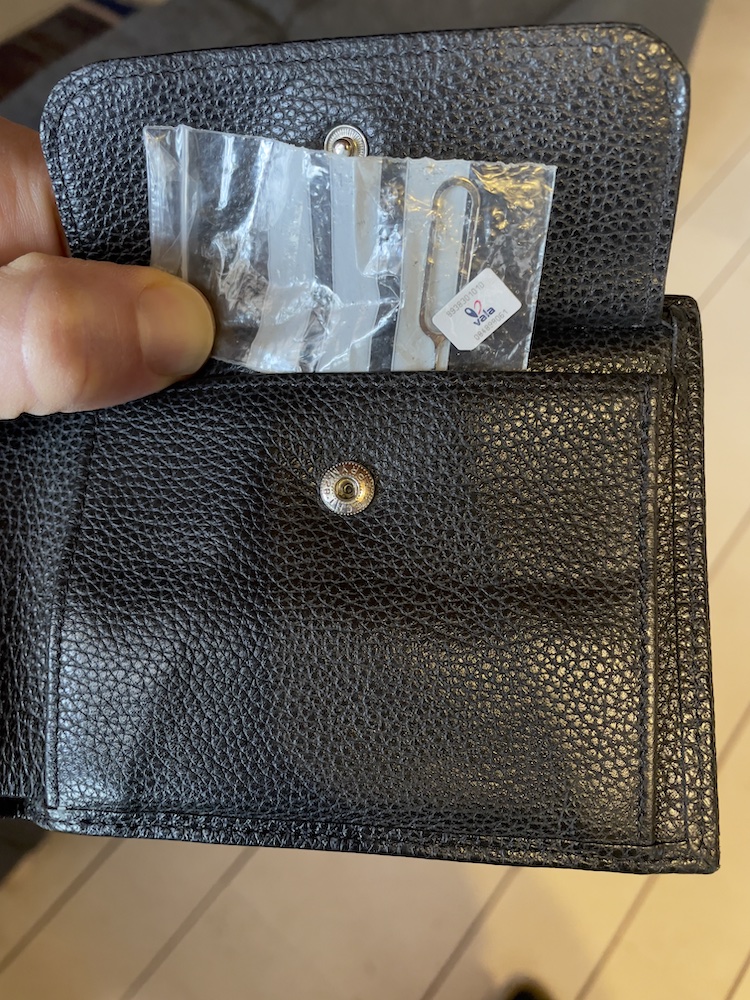 Another tip is to always ask the way to know your remaining data traffic (usually is a weird key combination: *101# then number 2 for the Vala ISP), because usually the ISP apps are localized in the local language and they aren’t usable.

Fortunately -usually- there’re lots of free/open Wi-Fi networks, but if the Wi-Fi doesn’t have a WPA-PSK password is totally unsafe to use it, because the data travel unencrypted from your device to the router, and everyone who is eavesdropping on the same (W)LAN can see your passwords and info in clear.

So the best thing is to always use a VPN. And since I don’t trust so much the VPN services, I left powered (connected to a a UPS) my OpenWrt home router with the WireGuard VPN/Tunnel. See the post about My network home setup - v3.0 In this way all of my data were routed from my device to the unknown router encrypted with my VPN service (my home router). 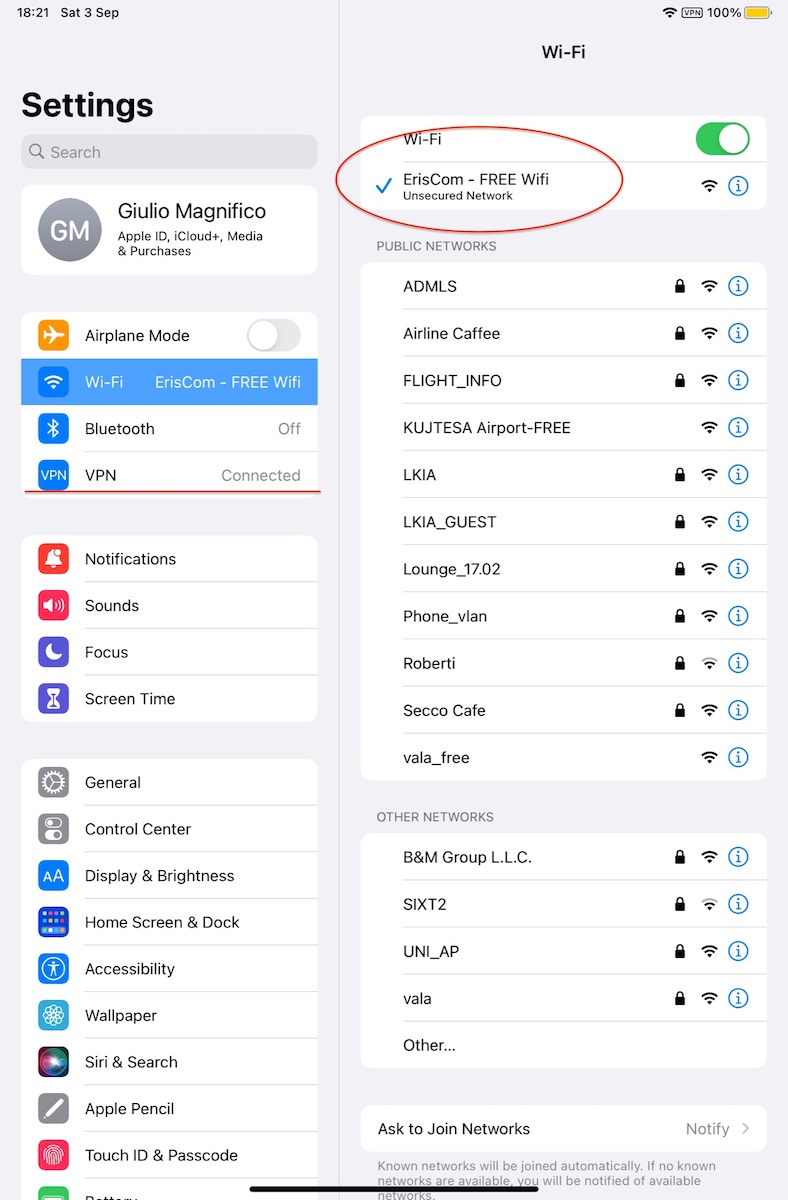 And about the electricity, I suggest to avoid the power outlets with the built-in USB connectors, they can be unsafe and if you loose the control on your phone during a trip, you loose everything (maps, schedules, payments, etc…). Just carry with you a 3/4x ports fast USB power supply. 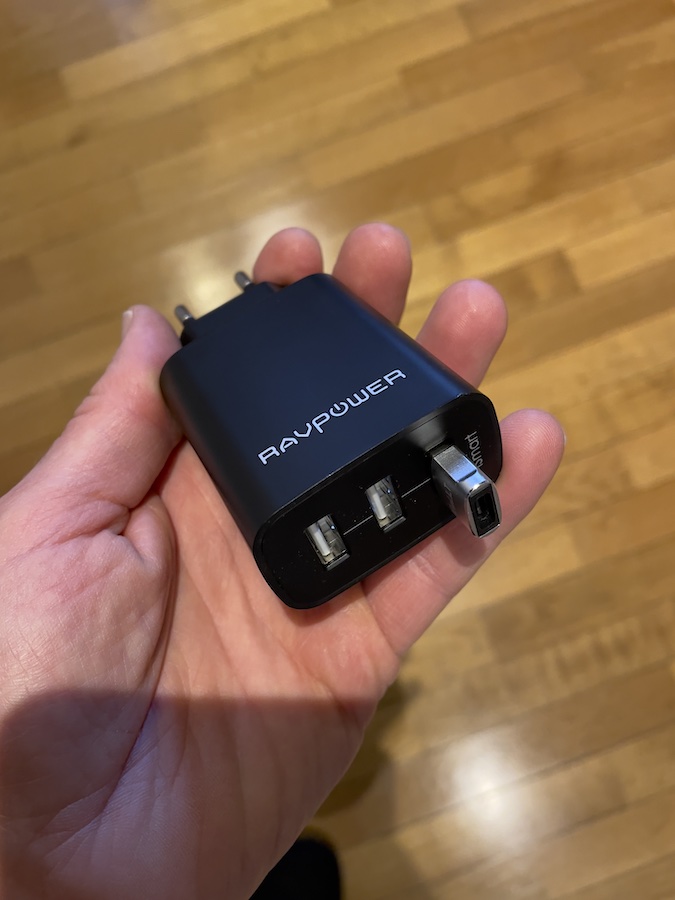 Always bring with you two memory cards (one empty), because if the militaries force you to delete all the photos (as it was happened to me in Mosul, Iraq), do it, the memory card. Then take it out from the camera, hide it somewhere, and insert in the camera the blank card. Then when you will arrive in your hotel you can use a software to recovery all the photos from the card. But in order to recovery them, you must not have taken other photos “over” the erased memory card. If you overwrite the old data/photos with new data/photos you won’t be able to recover the old data/photos.

In order to charge the batteries of your cameras use a USB charger, because it easy to find a point to charge (i.e. I found very useful charging it inside the car with the USB port). 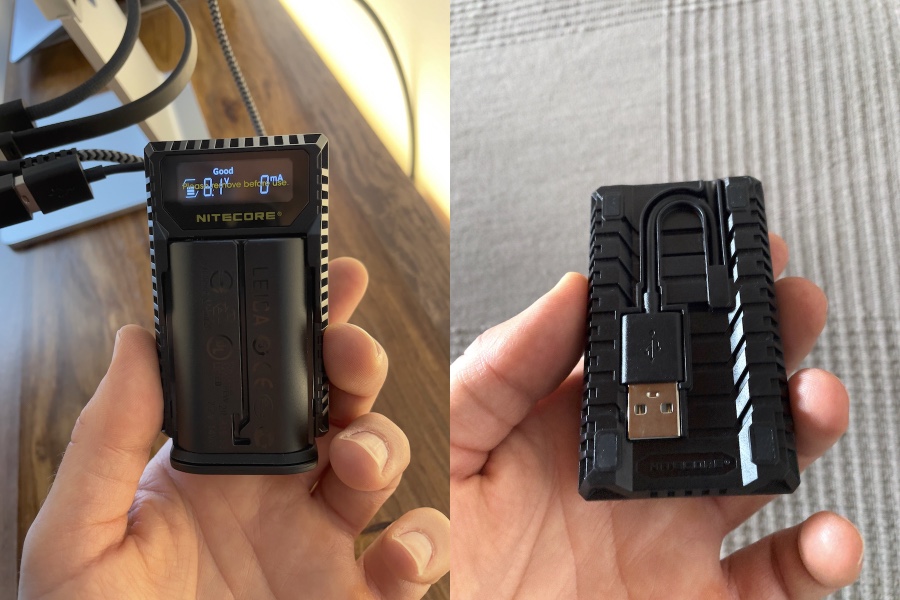 Carry several adapters with you, they cost little, take up little space and are very useful. 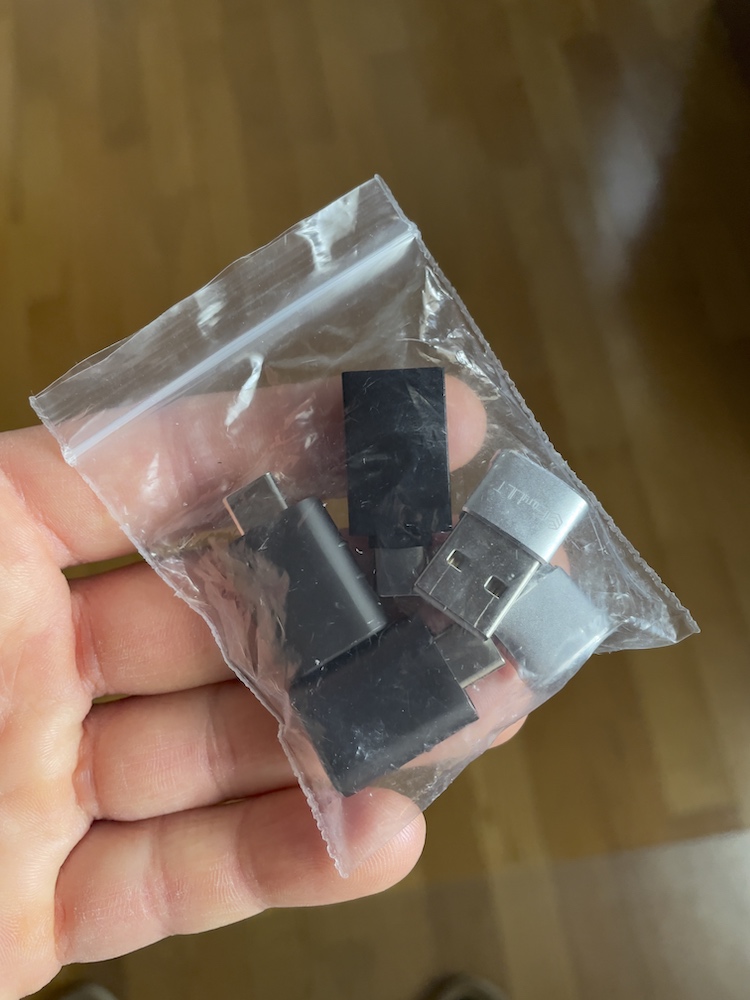 A small medical pump (pay attention: it must be without talco inside) is a great tool to clean the lenses from dust. 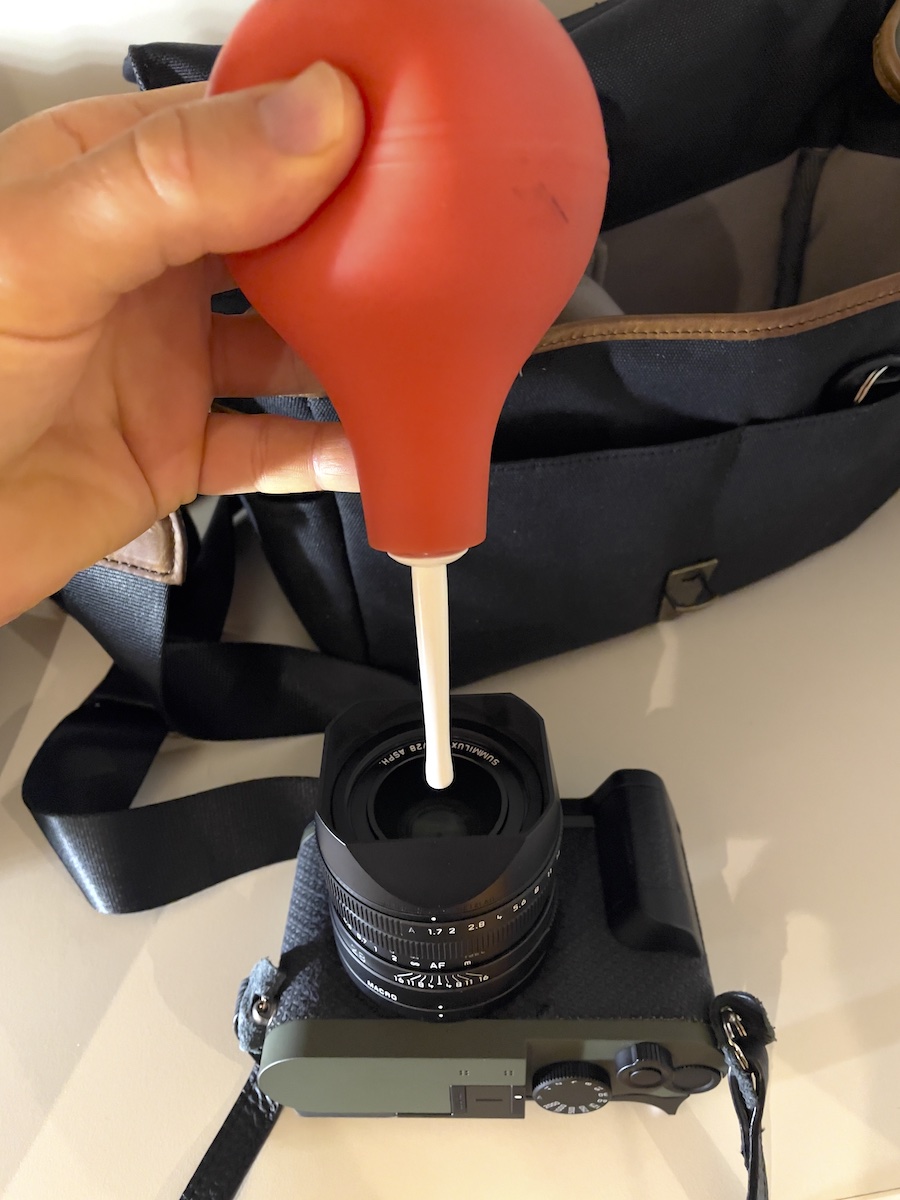 Use some cargo pants and keep inside them your wallet and passport (not in the bag).

In the end just remember to stay safe and have a nice trip.