My idea is to achieve a technological house but that doesn’t rely only and all on a connection, because it can have failure and is not always more useful, I want instead to have a handy and comfortable setup to enjoy my everyday life with the help of some automations and tech. But my priority is also the appearance, so I tried to build some “nerdy things” with cables and a lot of hardware but without leave the cables visible or expose the power strips, plugs, etc… since I hate to see all of those messy and horribile hardware. And I wanted to achieve a design that mix and creates contrast between old furnitures design and new tech gadgets. Because both things can cohabit.

So, first of all some photos of the final result, so you can choose if you are interested to read the other part of the article with the explanation of how I achieved this result. 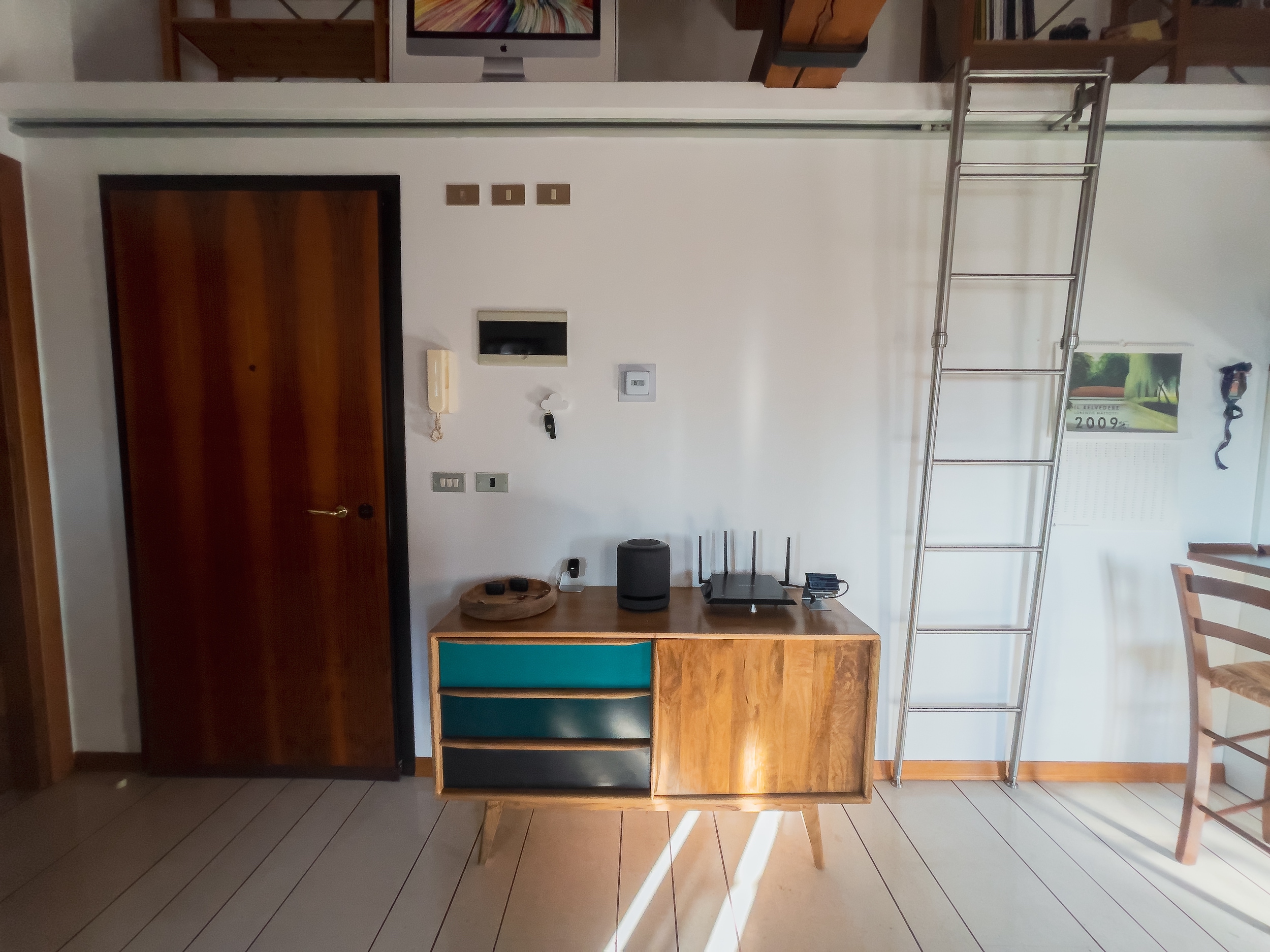 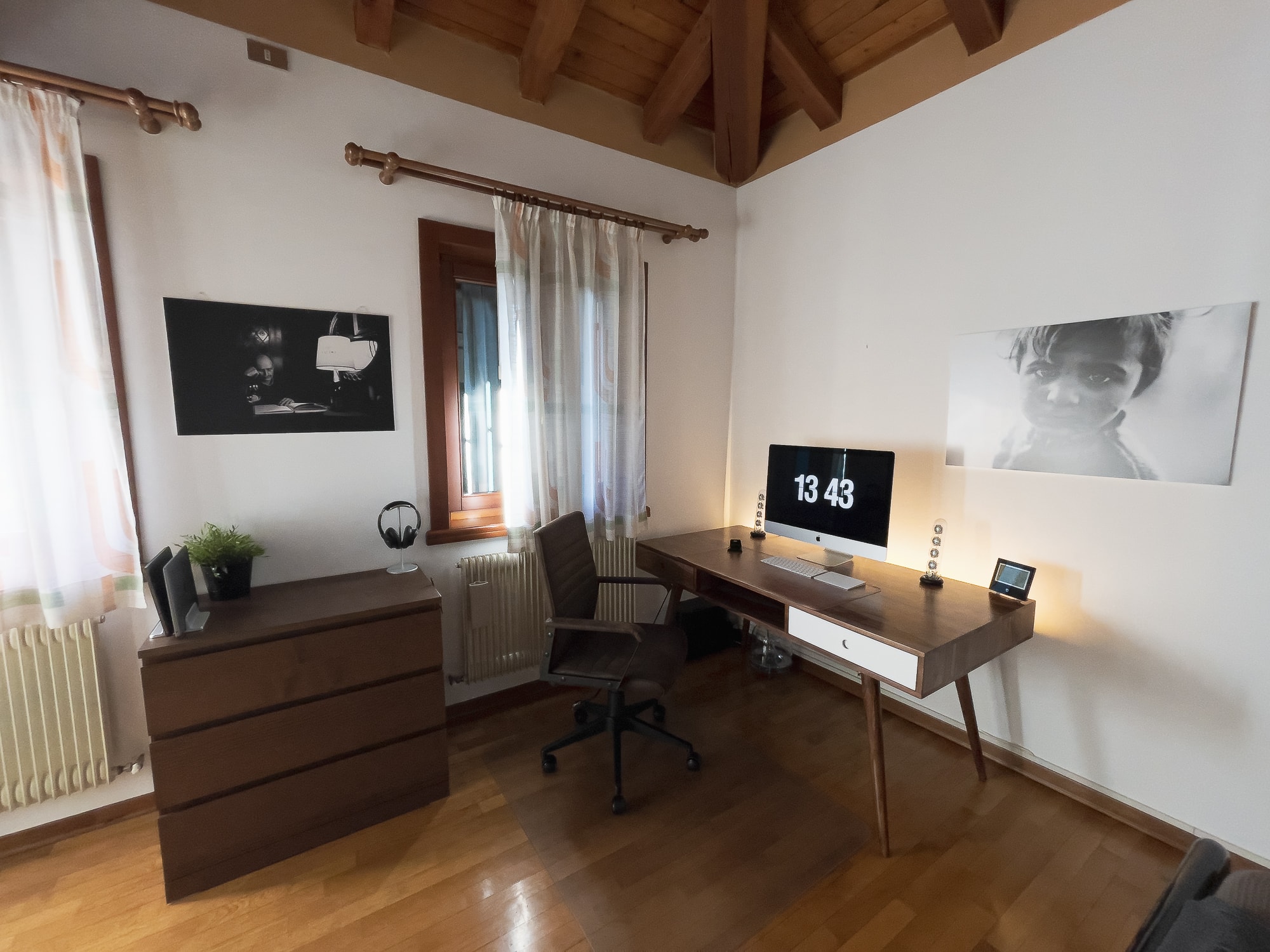 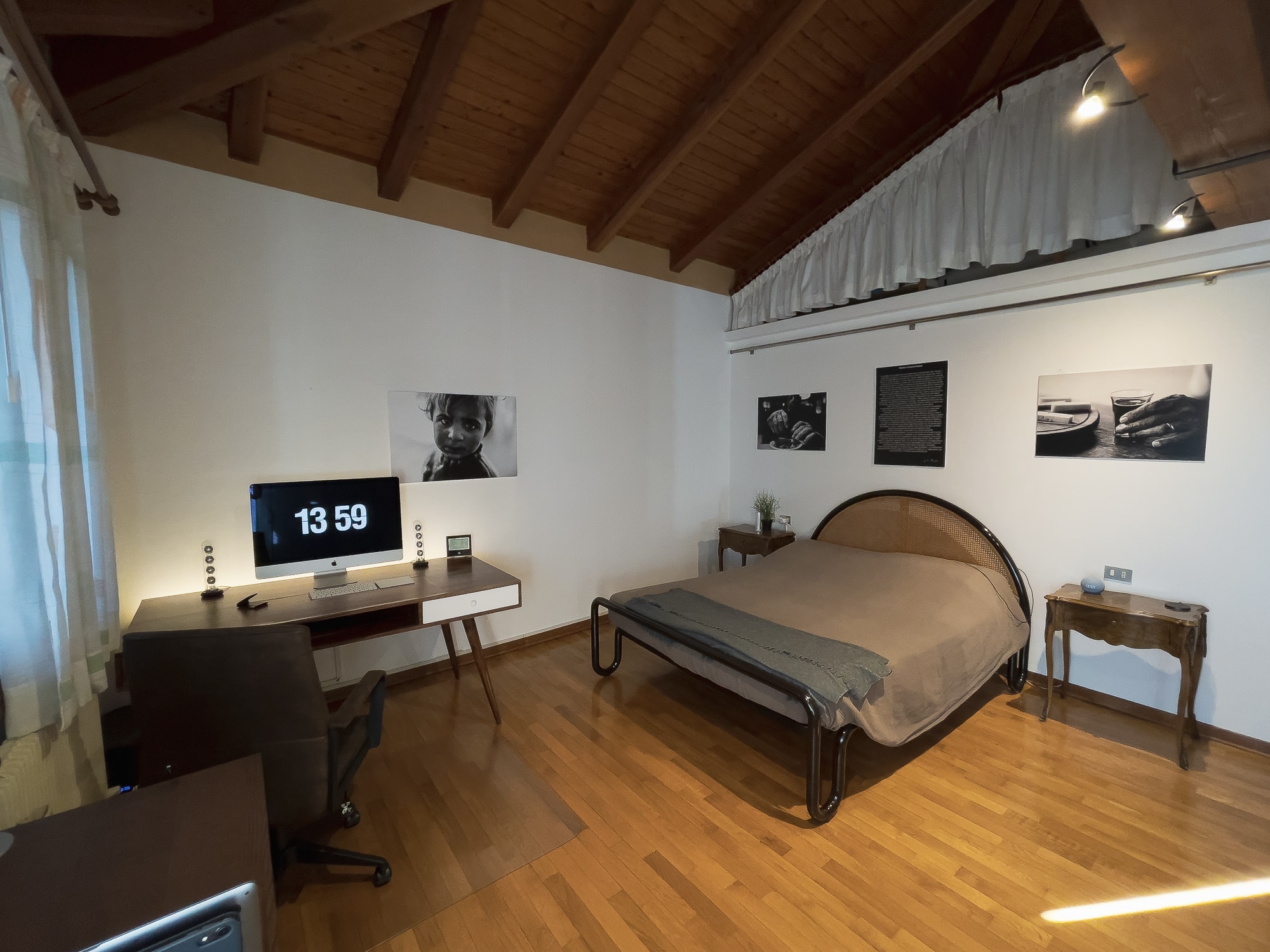 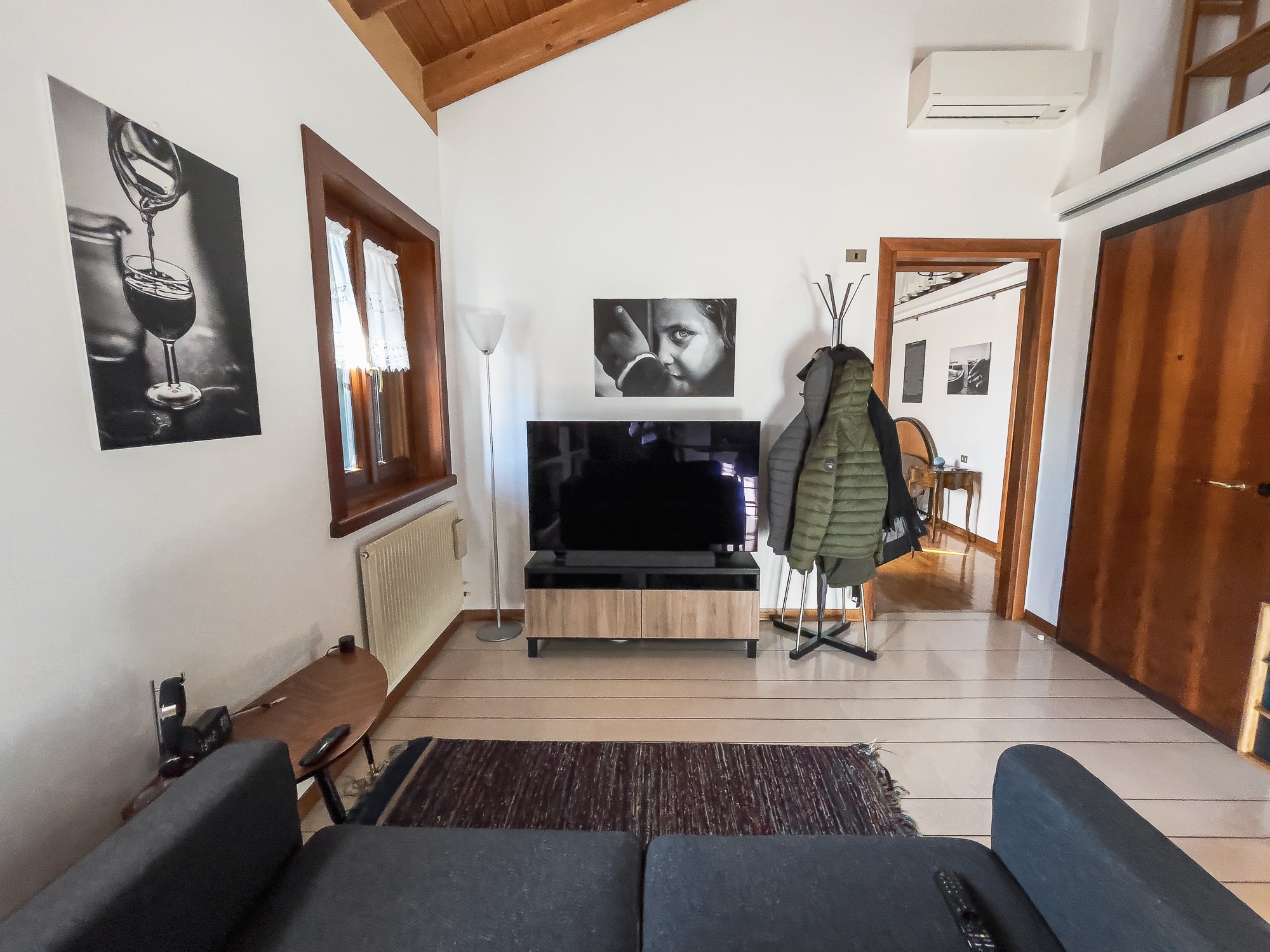 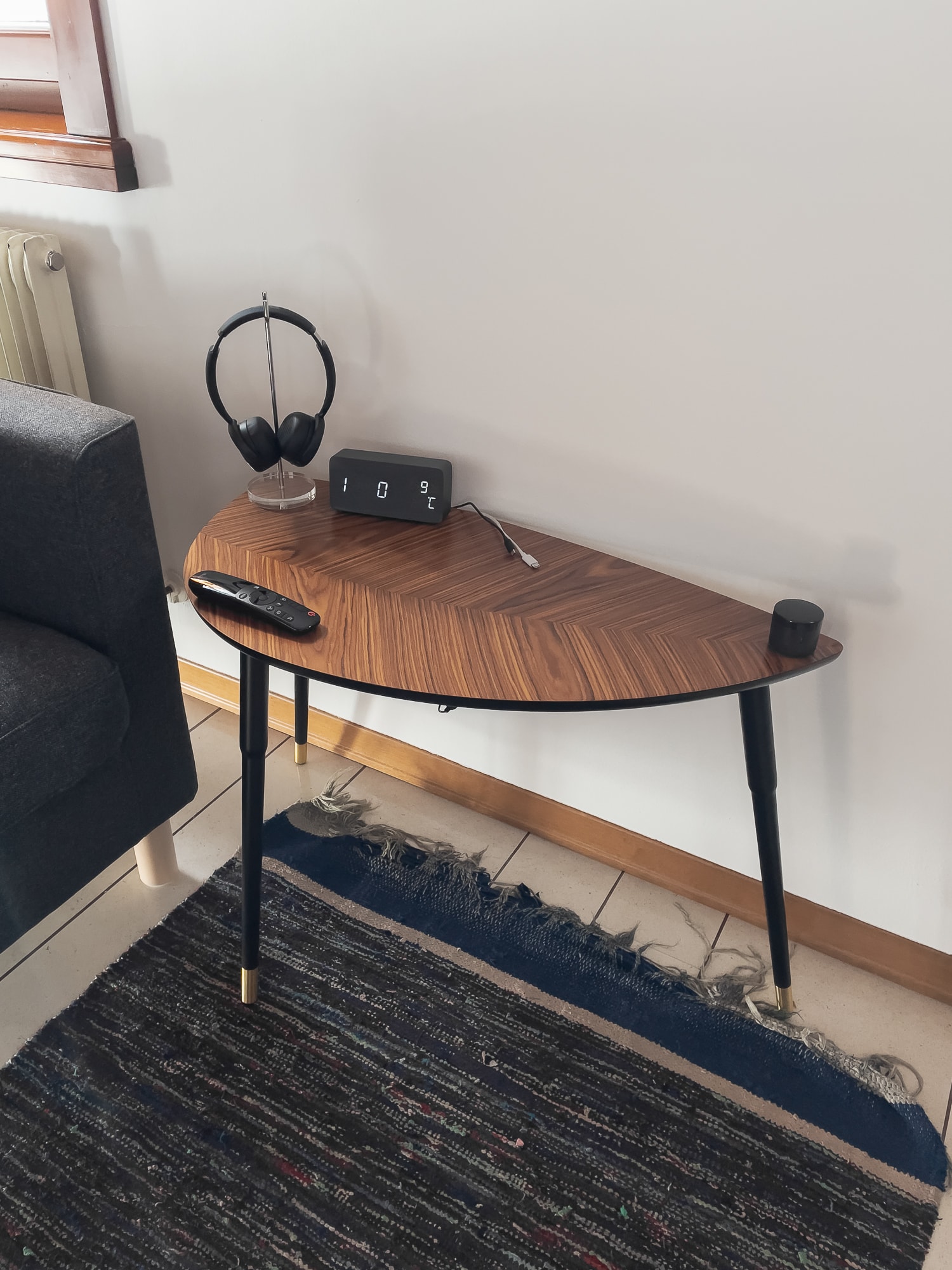 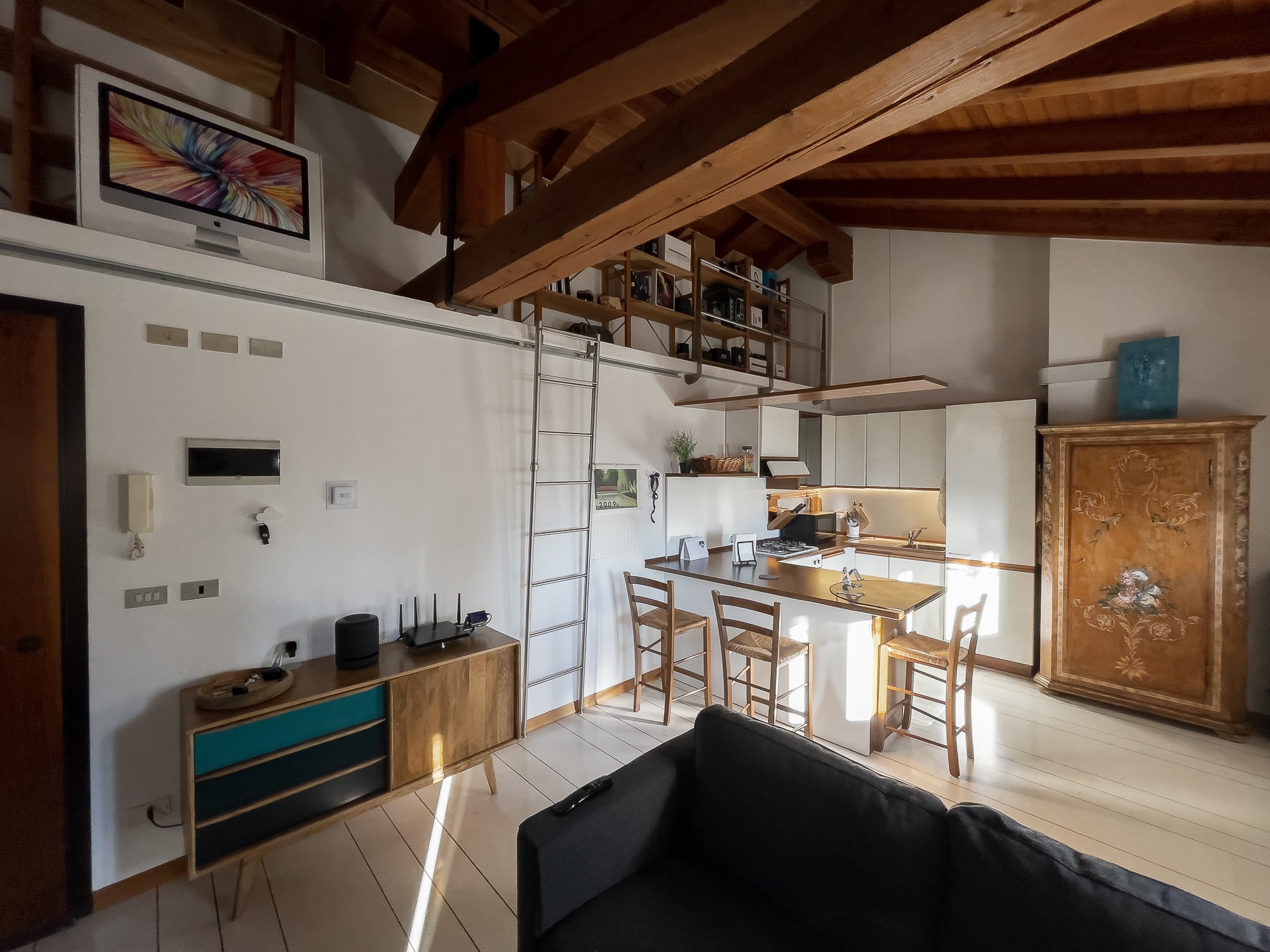 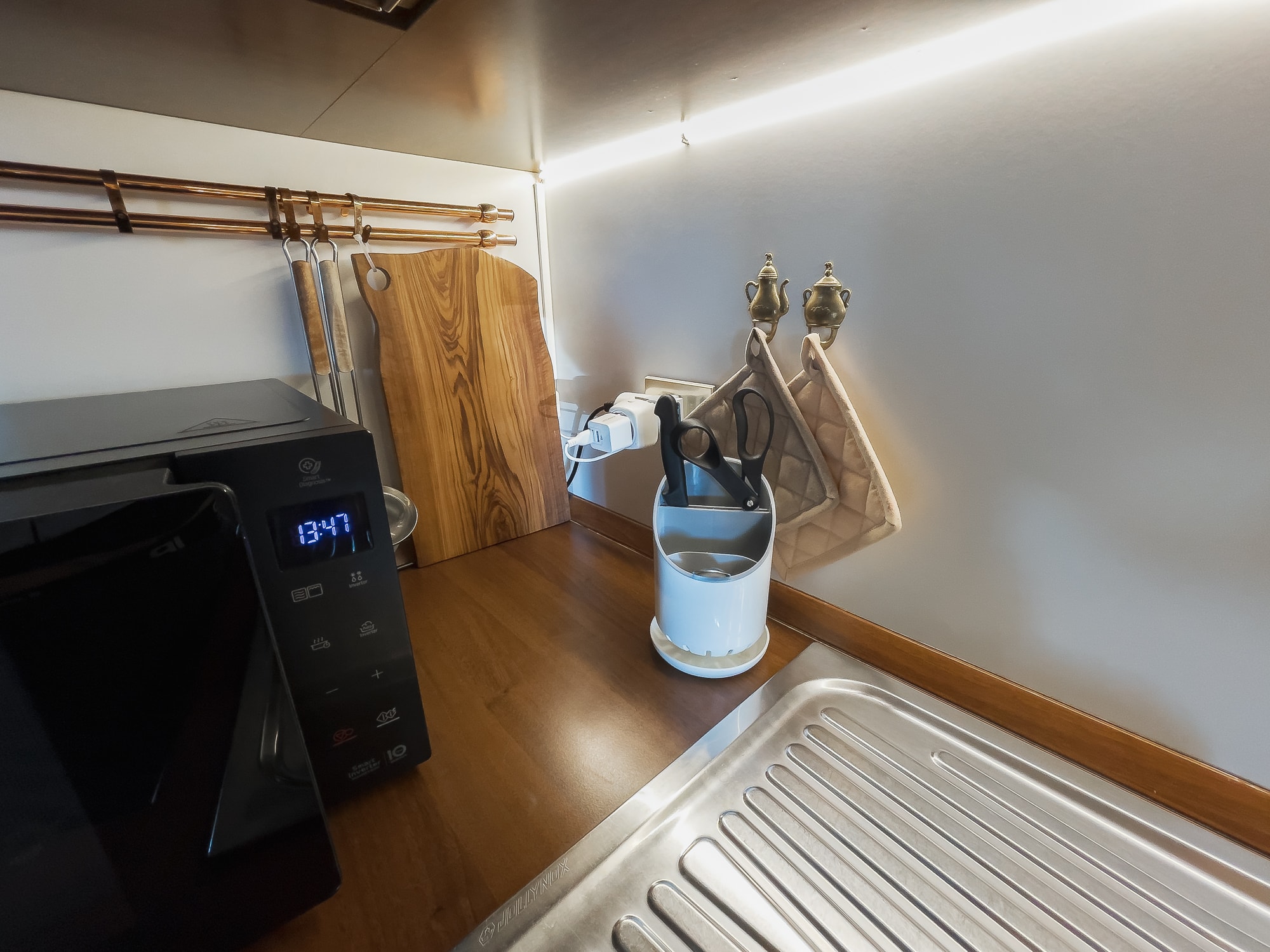 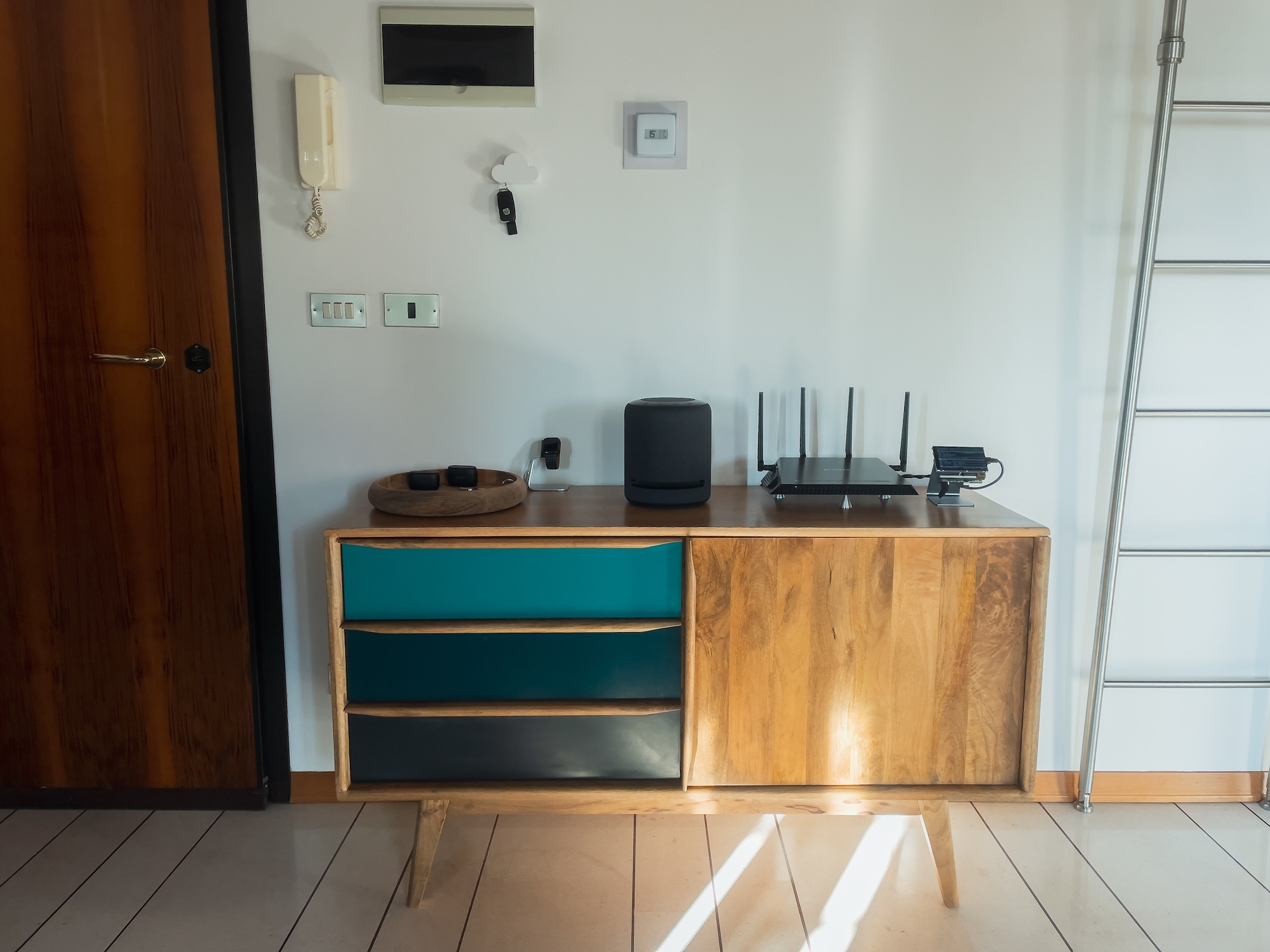 Starting with my fundamental furniture in order to have some charging and supporting surfaces: a piece of furniture at the entrance/middle of the house, in order to store the modem, router, Echo Studio, some gateways, etc… I chose the Maisons du Monde Janeiro and this is what I’ve done to hiding all the stuff inside

First I’ve drilled two holes (on for the in and one for the out) in order to open the passages for the cables, then I stored inside all the stuff: a modem, Netatmo gateway, UPS, charging, power strip, router, Echo, Apple Watch, Netatmo, etc… you can argue that inside with the closed lid can be pretty hot (it was also my fear) but those things are not generating much heat (the modem runs at 35/40 °C), plus I can left the lid 2/3 cm open so there’s absolutely nothing to worry. 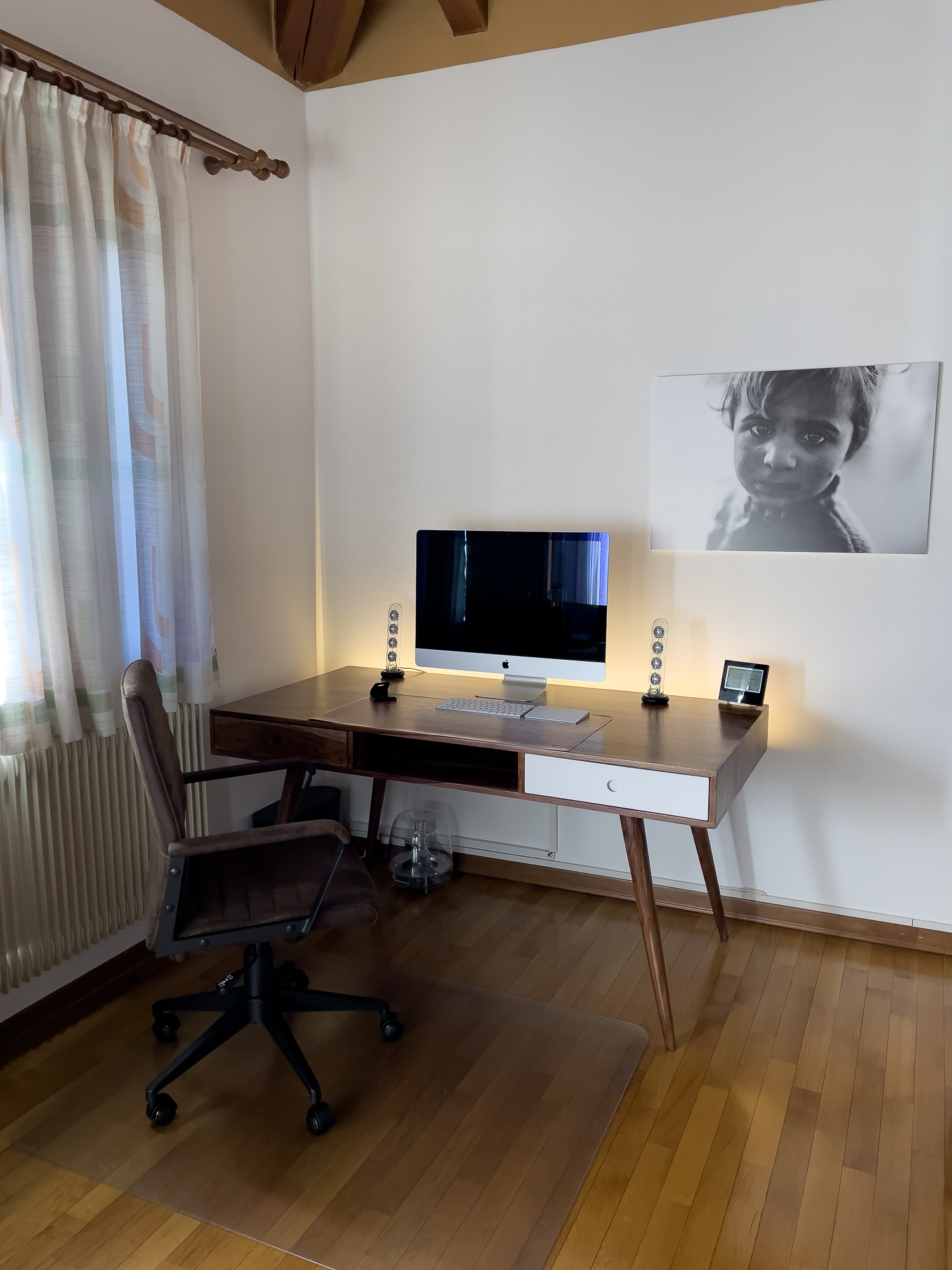 For the desk I chose another Maisons du Monde product, the Andersen desk

First I attached a led strip on the rear, this desk is already perfect because it has a border where to stick it, it’s important that you put the LEDs pointing to the ceiling (not the rear wall) because the light must emitting/pointing up. Then I attached two brown papers, cutted for the cables passage, to prevent the light leaking from the bottom, and the plastic channel for the cables. 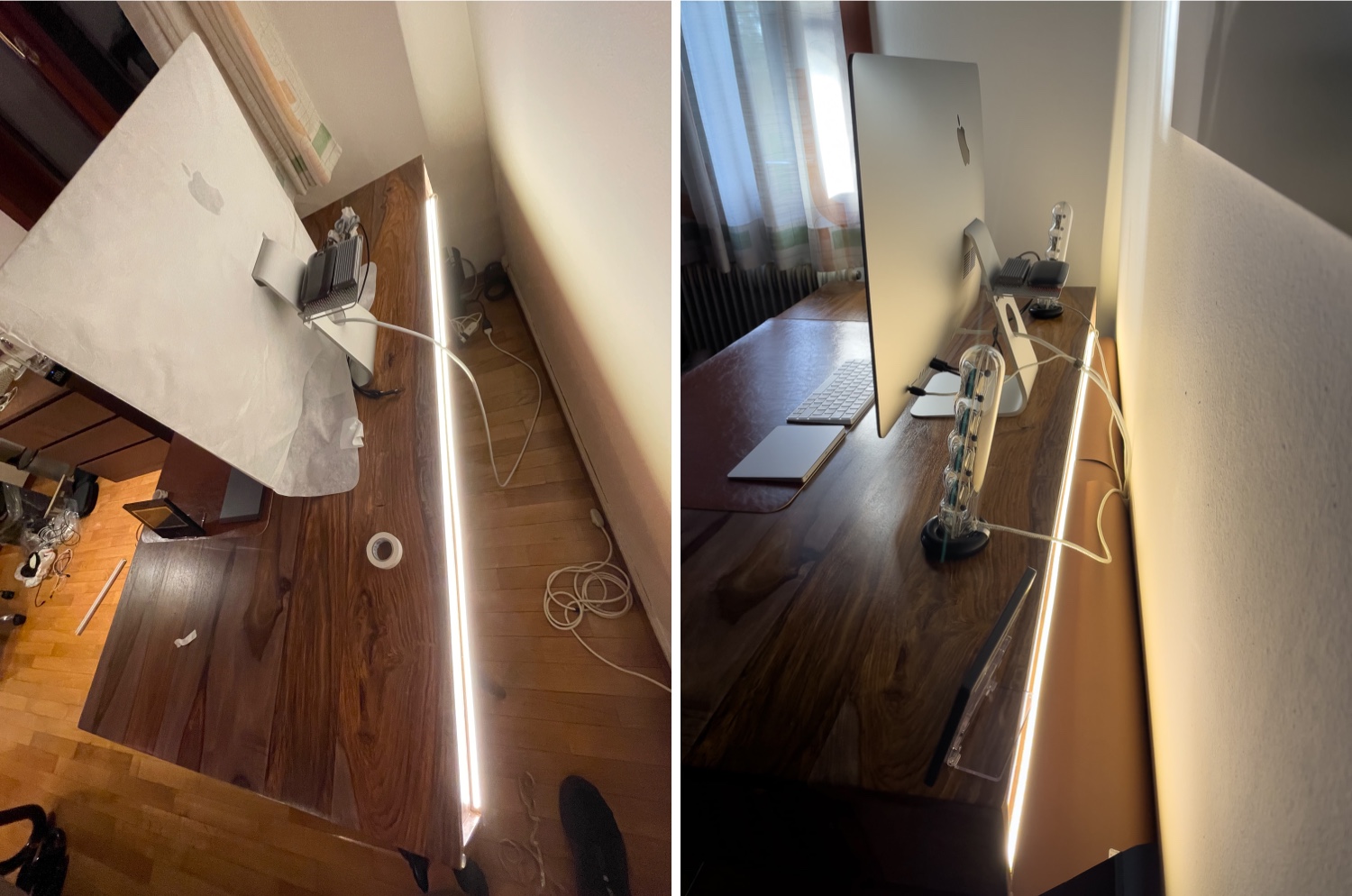 The other furniture -is a drawer- comes from Ikea, the Malm

That is very useful to me because I can lean on it the MacBook, the iPad, all the other things that I need to lean somewhere, so I need a power to charge them! Fortunately this drawers doesn’t require a lot of t in order to hide the cables on the rear because it already has two holes in the upper corners where the cables can exit. It only requires you to drill a hole to route all the cables inside it (before you complete to build it): 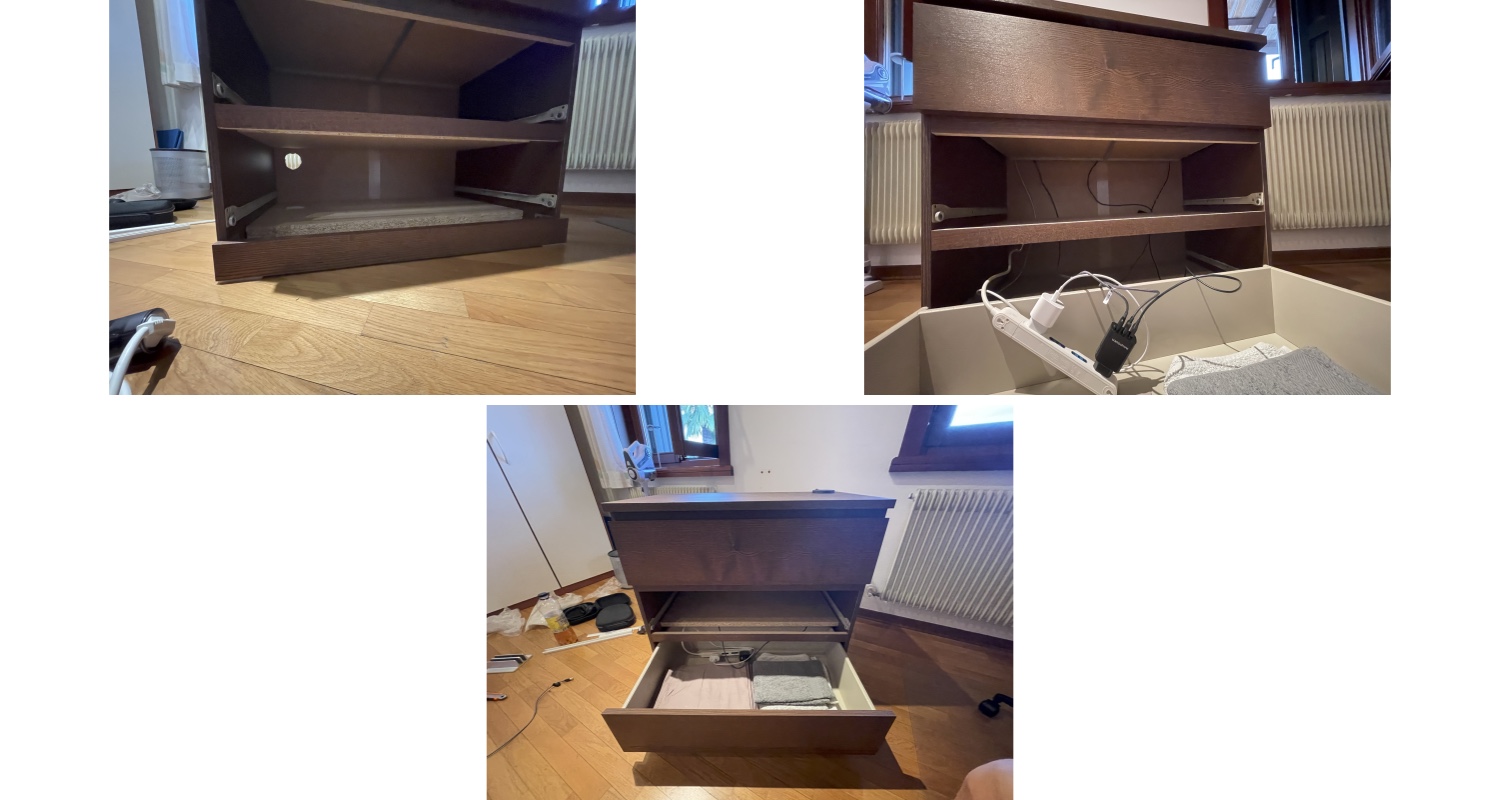 And on the bedside table I’m using the Echo Dot Clock and a Native Union charger, plus a cable to charge, and use, my phone when I sleep. 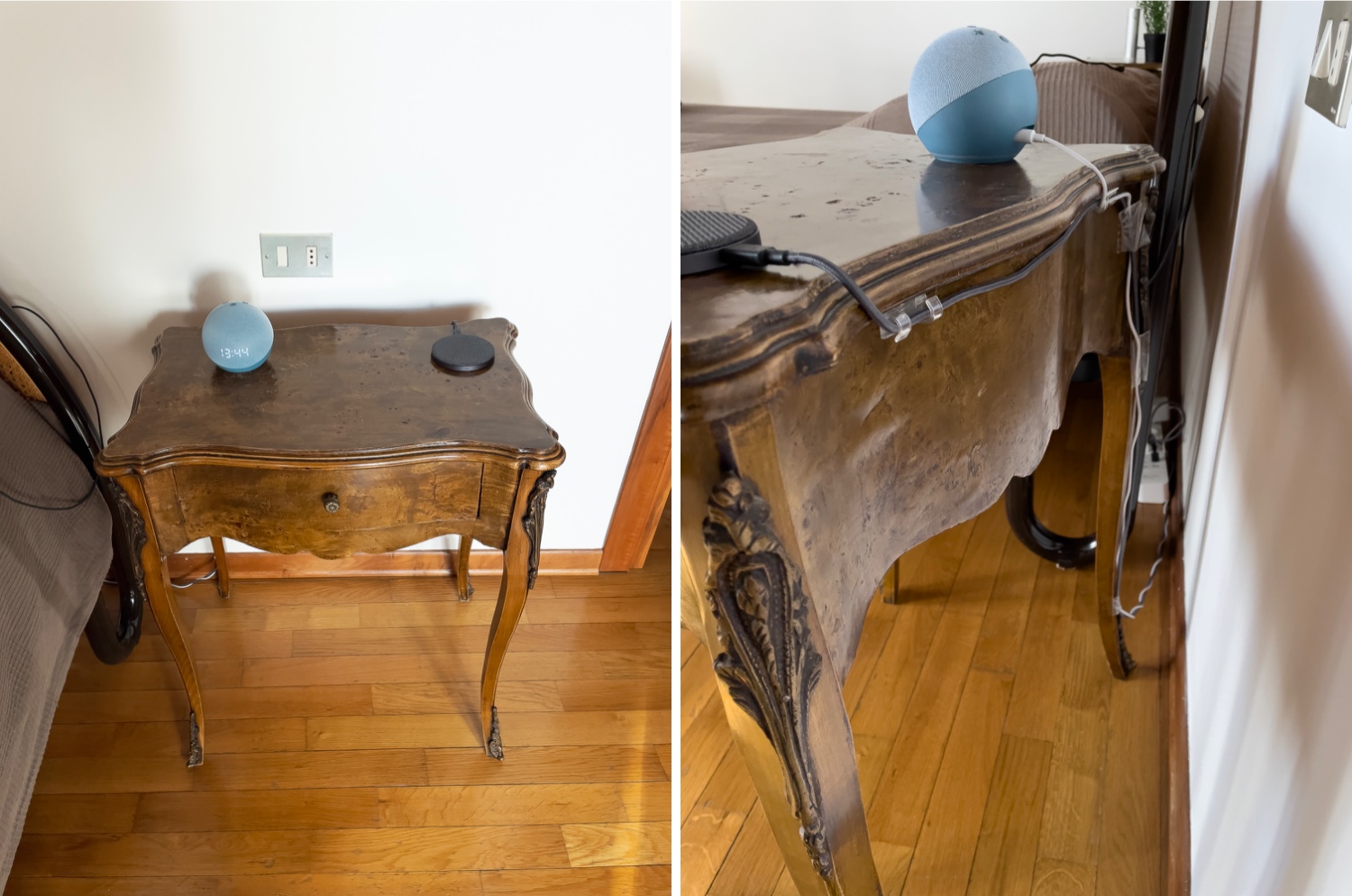 For the living room I chose again Ikea, the small table is the Lövbacken and then television furniture is from the Bestå series that hide very well the cable because it has some internal routing for them. I’ve only put a power strip on the rear and hidden all the cable behind the television (an LG OLED that also has a nice routing way on the back). 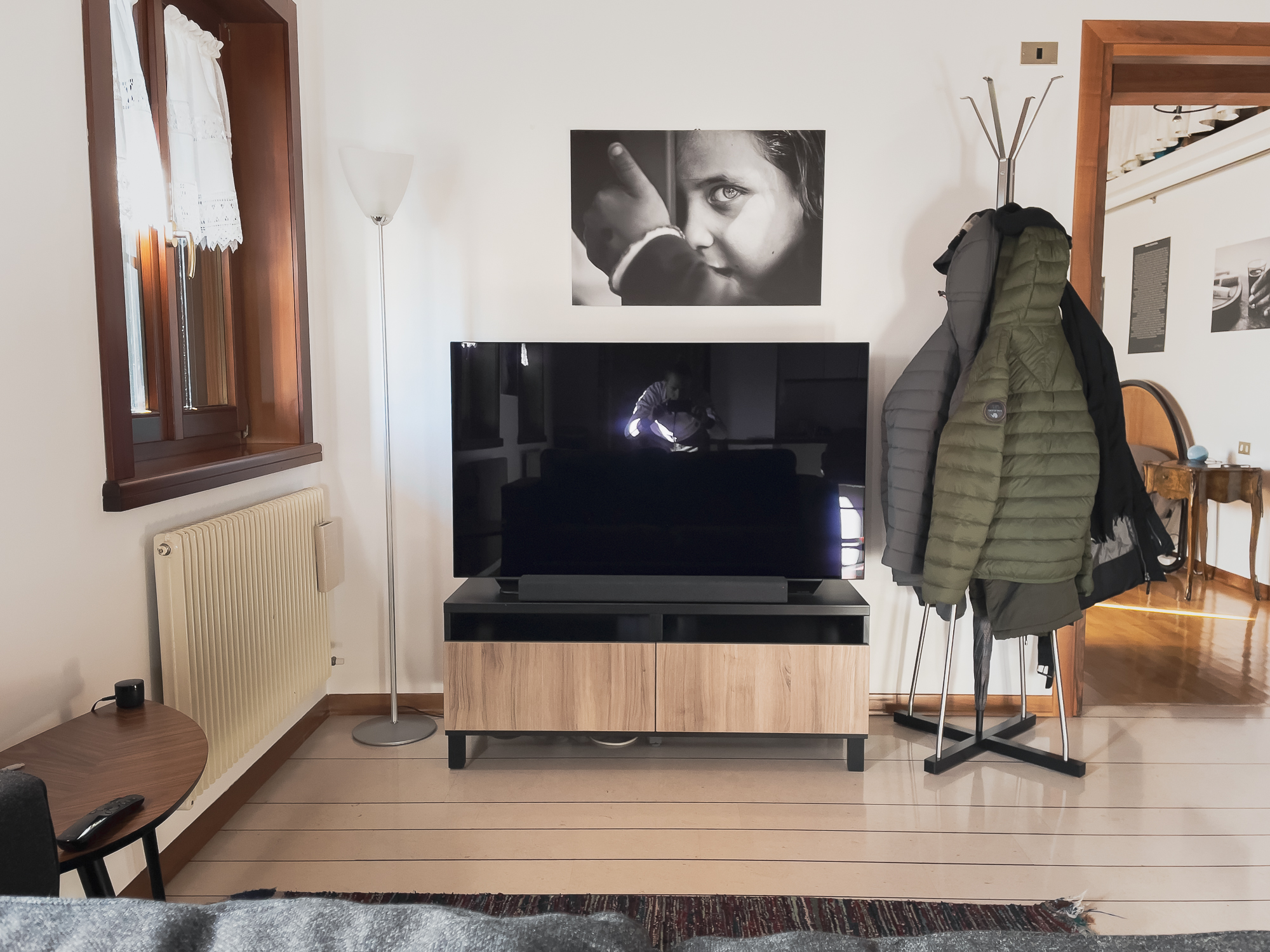 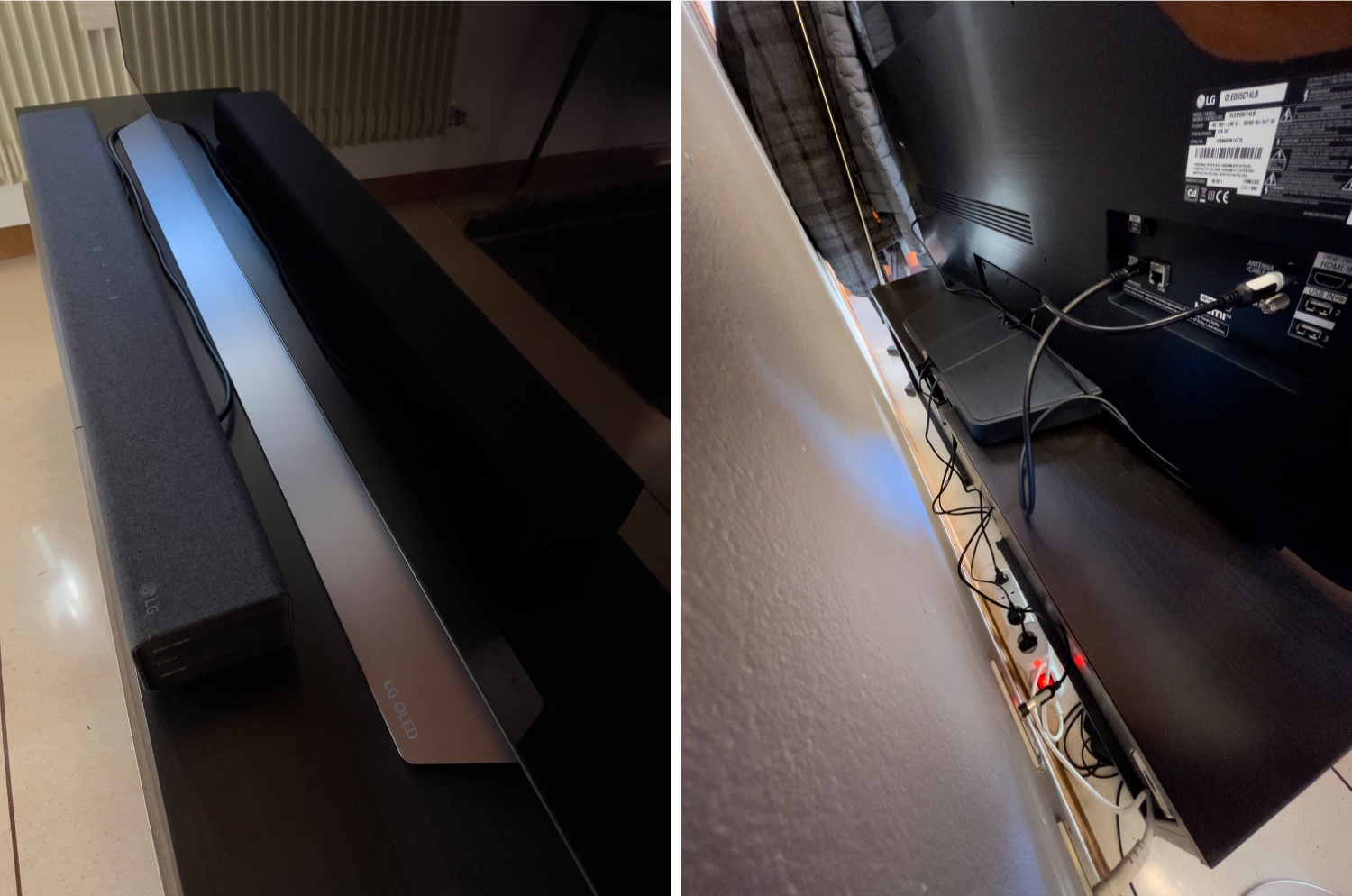 I think is more interesting the small table that I use to lean the remotes, headphones, and the Broadlink RM4 in order to control the LG TV and the air conditioning via IR. Because the default Alexa skill is terrible for this TV, I prefer the RM Mini way. And I’ve also put two cables (mini-usb and usb-c) for charging the headphone or other things. But I’ve done a bit of hideousness here, but you can see it until you see under the table =)

(no, the clock isn’t broken, is just the LEDs’ refresh)

In the kitchen I’ve only put the Meross smart plug with a button, in order to control it via Alexa and with an on/off button, with a LED strip and a free USB port in order to charger something when I cook, or I’m there:

Absolutely nothing special here, only an Echo (not the best way to hide the charger but it’s also the nearest socket) and a bluetooth sensor to retrieve some datas: 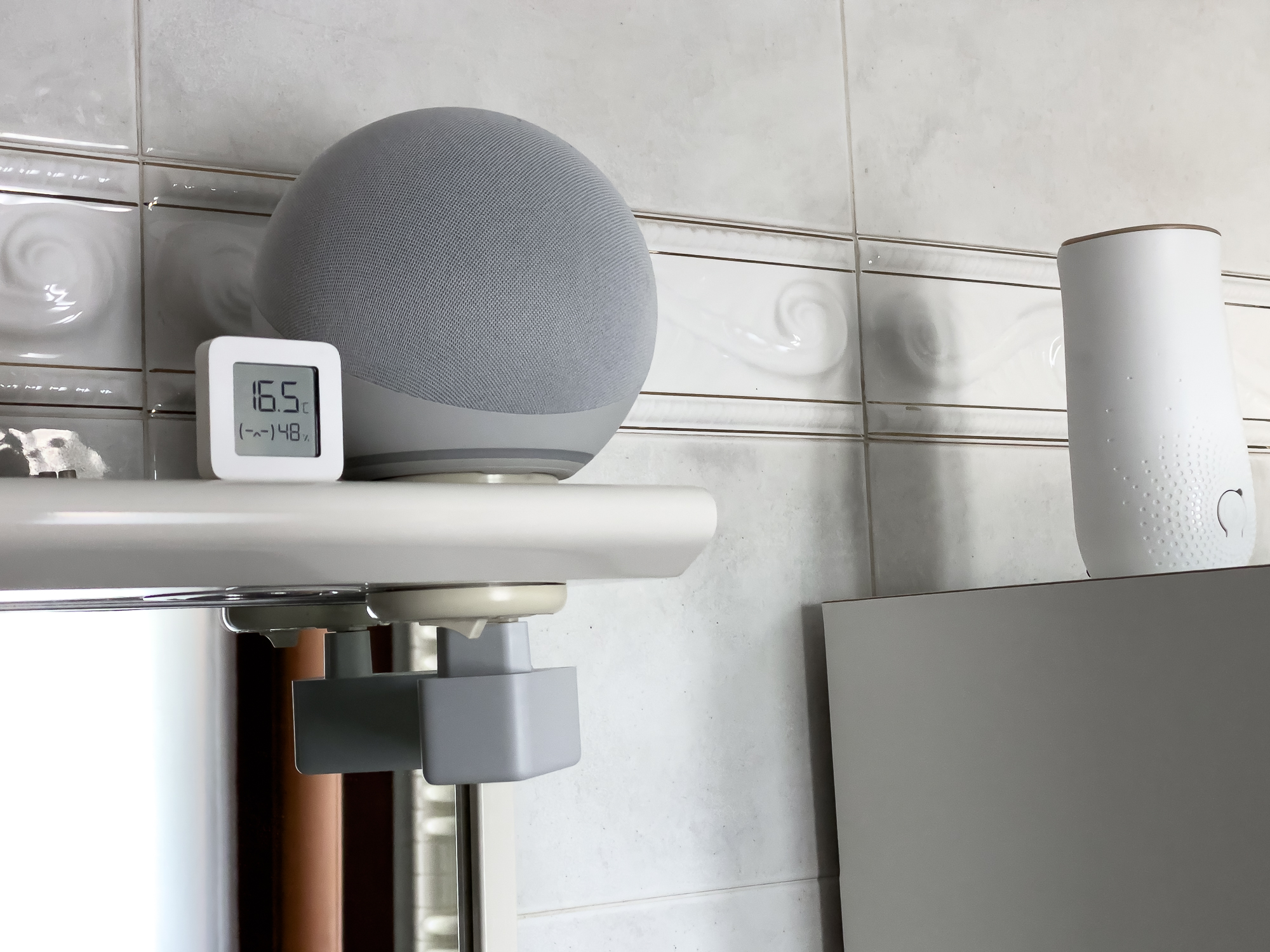 For the software I rely on Apple and Amazon (I hear you disappointment GAFAM heater), but with some mods in order to increase my privacy and give less data to the big techs. 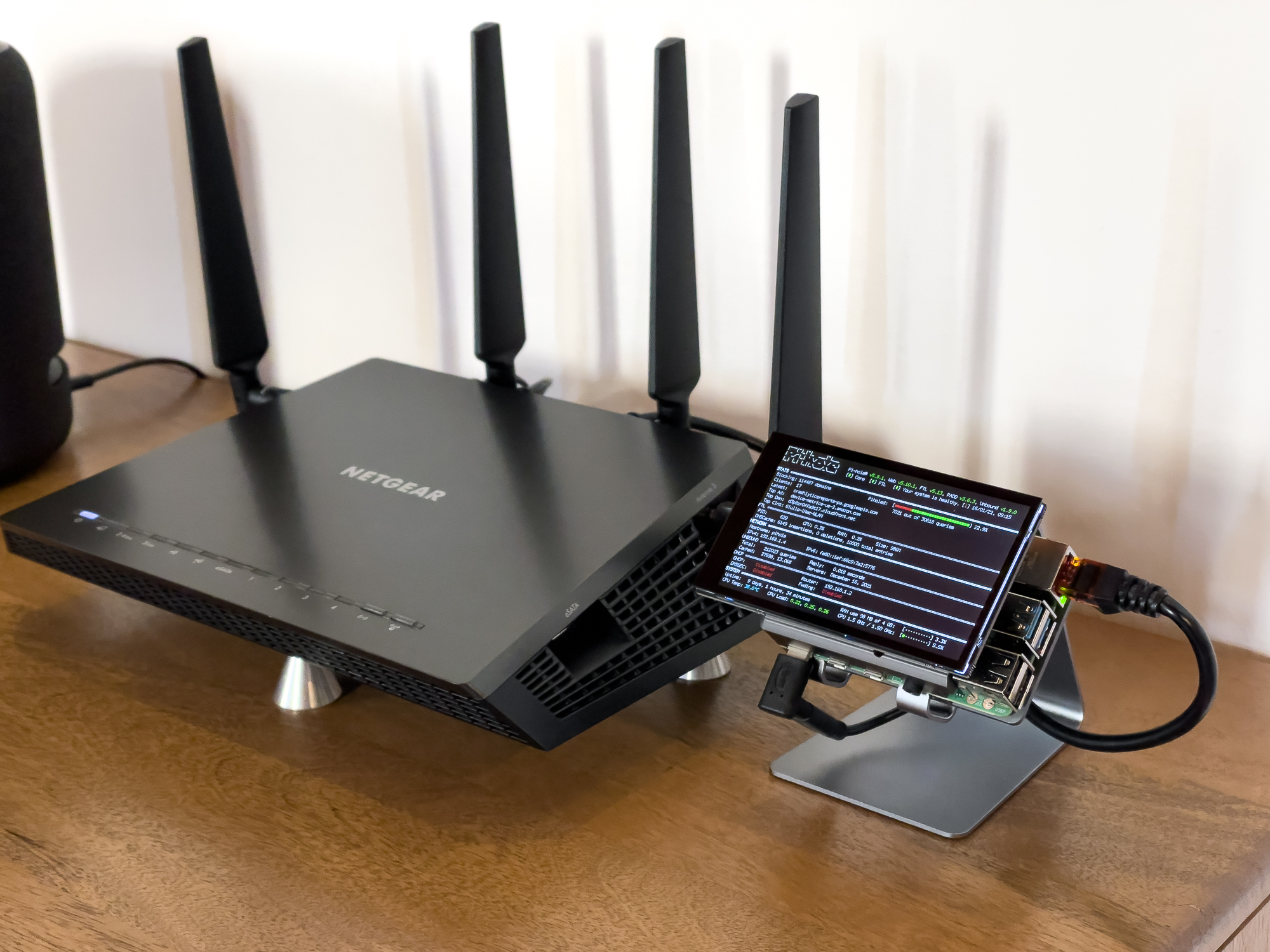 On the firmware side I’ve optimized all the rules (QoS) in order to give less priority to all the IoT devices and prioritize the iMac, iPhone and iPad 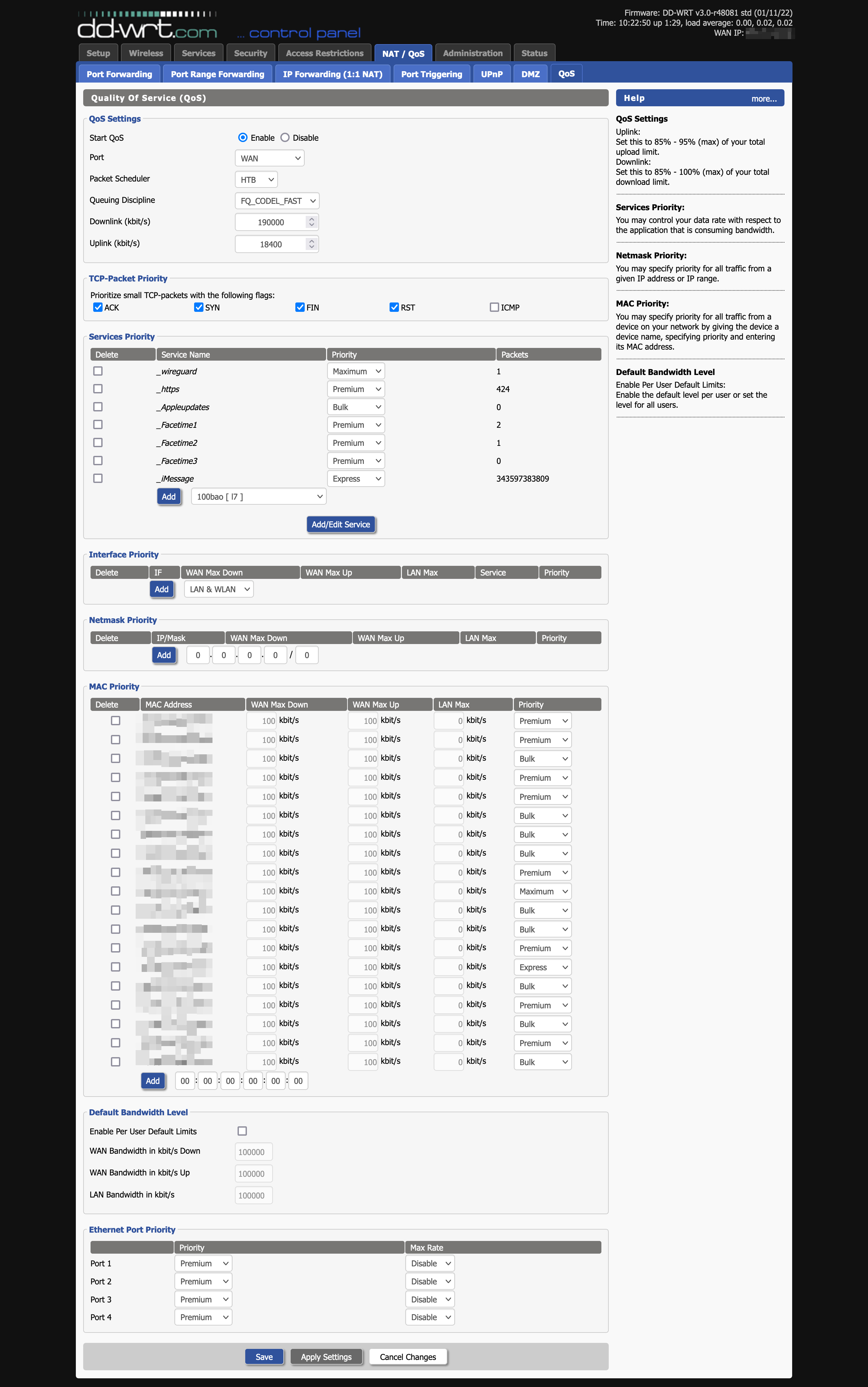 And I’m using all the IoT devices on the 2.4 GHz channel, that’s isolated from 5 GHz, in order to have a separate radio for privacy and to have better wireless performance (because of Airtime Fairness, short preamble/GI/etc…). 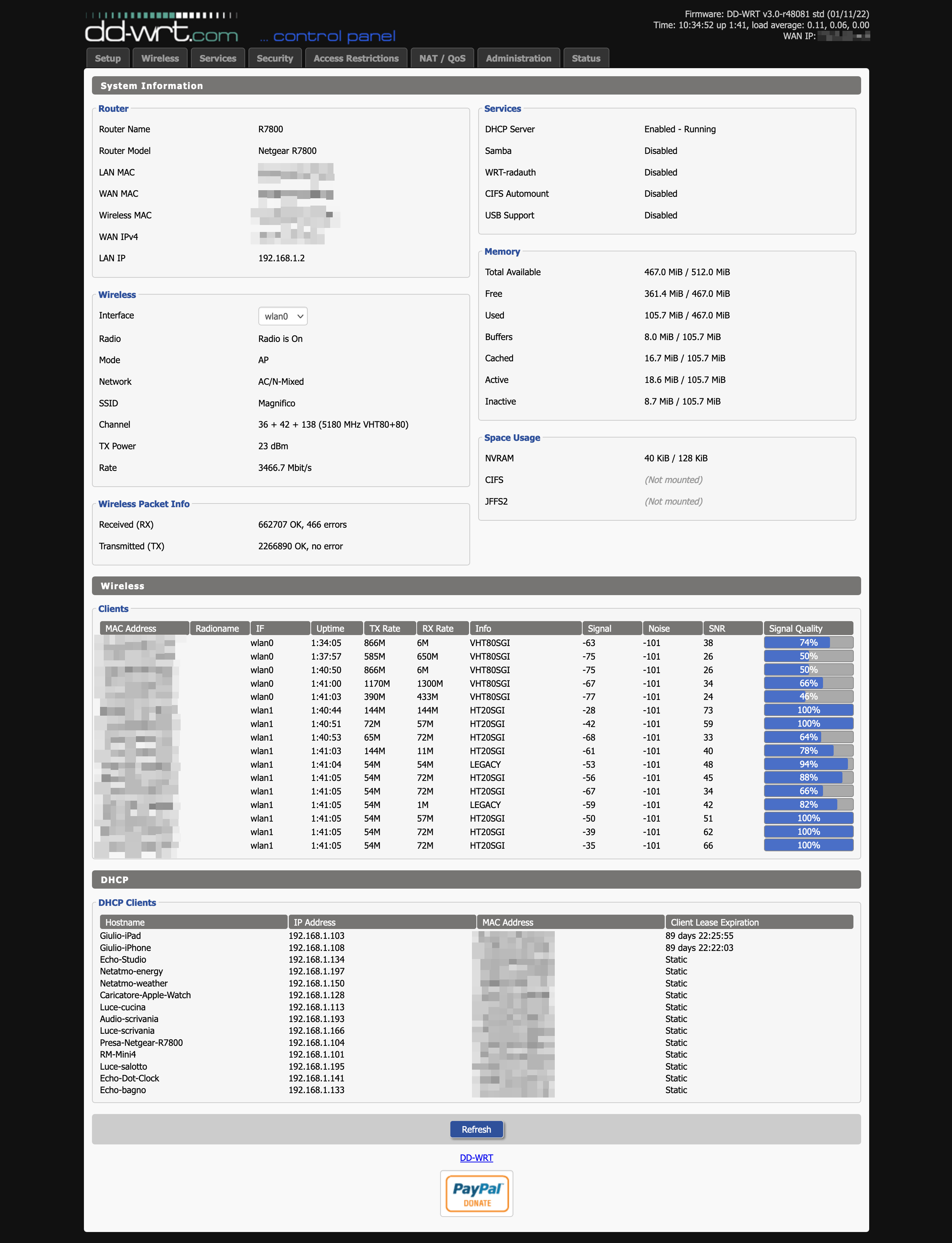 Attached to it there’s an (overkilled) Raspberry PI 4B with Pi-Hole and Unbound that blocks all the tracking request and helps to preserve my (DNS)privacy. You can read more in this old post. And as you can see, Amazon and Apple domains are on the top (of blocked ones, of course) 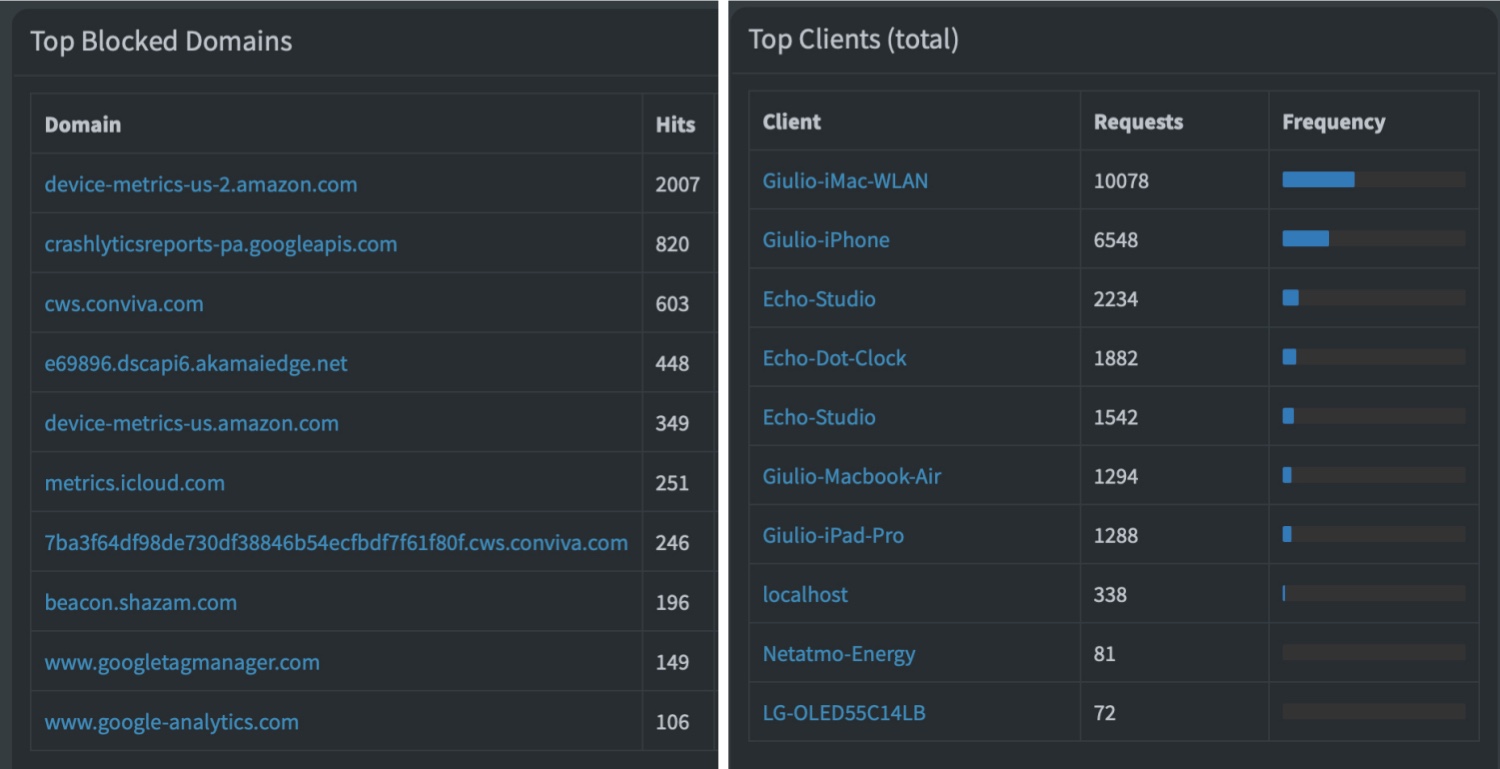 In the end there are the Broadlink RM Mini 4 that controls the air conditioning and the LG television. I’m also using a lot of Smart Wi-Fi Plug with Energy Monitor (I have 10 of them, but I’m not using all at the moment).

The smart plugs are very useful to run Alexa routines, like “Alexa, I’m at home” and it turns on the selected lights etc… you can ask me why I’m not using HomeKit. Well, I’ve tried it, but it has too many troubles and too less integration for me. Plus there’s no Italian version of the HomePod (only the Mini that is not what I’m searching), so even I would have used HomeKit, I must use Alexa.

But I also want to run specific Alexa routines using my iPhone sometimes, and this is possible but a bit tricky, first of all you have to install the Alexa Skill called: IFTTTrigger by mkZense, then (optional, only if you want to use Shortcut automations) connect your IFTTT trigger of the same developer, called Alexa Actions by mkZense integrations, and here you can read the tutorial to enable the triggers via Webhooks: IFTTTrigger-Alexa-Actions, then you have to create a shortcut that triggers a Webhook with your token, for example here’s my “iPhone Morning” routine

And the Webhook triggers this Alexa routine:

Obviously I have the same routines that turn off all the light and put the iMac to sleep, called (surprise!) “iPhone night”.

I was surprised by the speed of the action, is immediate, no lag, like you’re asking directly to Alexa.

Another fundamental -for me- routine is to enable a lot of actions via SSH from Shortcut iOS app to my iMac, for example when I wake, I’m very lazy to insert the password open IIna and launch my playlist that opens an italian news stream called RaiNews24, so let’s do it every morning when I’m saying “iPhone morning”, as you can see from the Shortcut action screenshot above, the last action is called: Run Sveglia Mac con password e RaiNews, this action wakes up the iMac, insert the password to Unlock it, opens IIna with RaiNews 24 stream using IIna and put it in full screen. (aka: it does all for me, you can also set the volume level if you want):

PSA: if your mac is already unlocked this action will insert your password in the foremost input field.

And the last action/shortcut put IIna in full screen, since I don’t want always to launch it in full screen, I created a separated shortcut in order that I can use or not it: 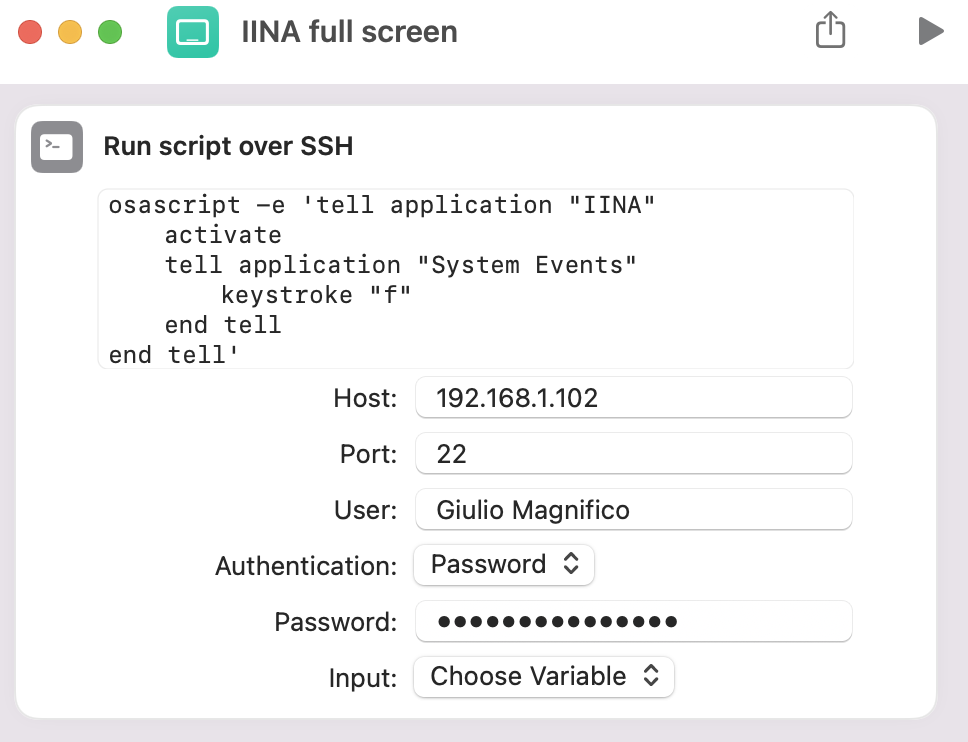 Another useful thing that can do a smart plug with energy monitor is: know if the attached appliance is on or off, for example I use the power monitor to know when my wash machine has ended its cycle or the microwave is not cooking anymore, or to know how much energy is the Raspberry PI using when it has the display on or off, etc… a lot of useful actions but they’re not indispensable (the price was few € more so I bought this version).

Obviously, I can access to all these routines/shortcut also when I’m outside home, because on the router there’s also a WireGuard tunnel (VPN) that doesn’t need to check the home IP every time, but is always updated thanks to dynamic DNS. I wrote about this setup in this post, and I can also use the DNS of the Pi-Hole to block the ads also when I’m not connected to home WiFi.

What I really miss in this setup is a smart microwave, to control it via Alexa or HomeKit, or whatever. Because it’s crazy that there isn’t a smart microwave on the market, I’ve found only one GE (General Electric) model but is not sold in Italy.

Since I use the microwave almost all the time to warm up the water for the coffee, to cook meat, soup, etc… it would be fantastic to control it via Alexa or an app that can turn on it 10-15 minutes before you wake up or you’re coming home. Another trick could be use a Swicth-Bot button but it’s ugly to see it, my microwave is black, and fundamental thing: it has not physical button but only touch buttons, so a Switch-Bot doesn’t work. If you know some hacks or a microwave connected, let me know please!

That’s all at the moment, I hope I have inspired something for your home setup. I’m using also a lot of other routines and shortcut to automate a lot of “daily behaviors”, but I will explain them in others posts. In this post I want only to describe my setup broadly.